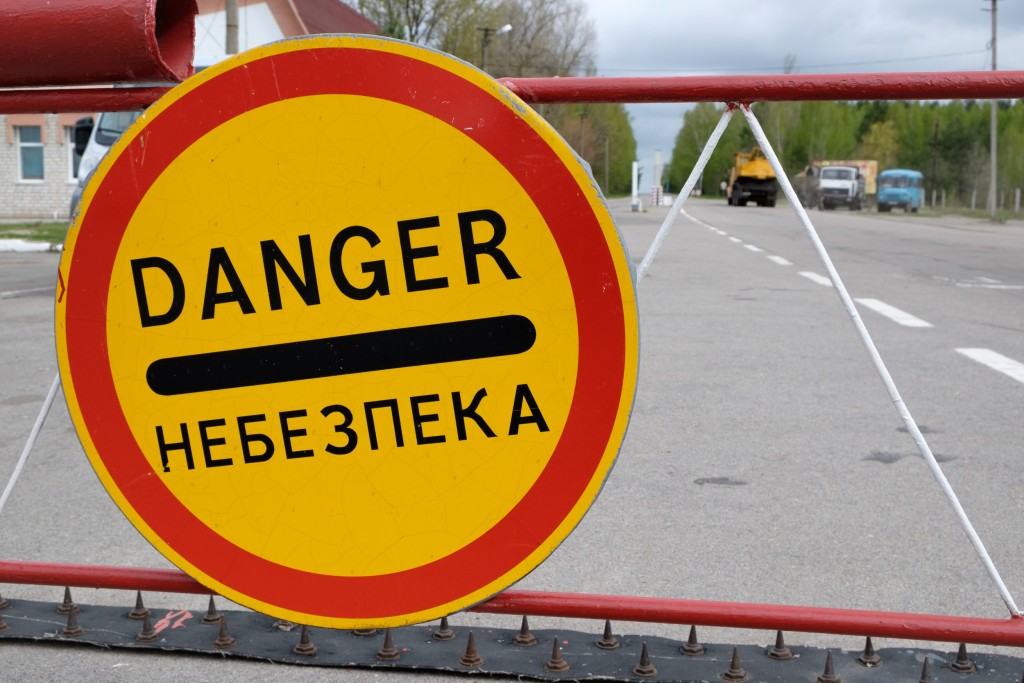 The road barrier at the Chernobyl nuclear power plant checkpoint.

Ordinary Ukrainians turned out on Wednesday to defend Europe’s biggest nuclear power plant against a Russian takeover as the International Atomic Energy Agency called an emergency meeting in hopes of creating safe zones. security around the nuclear reactors of the besieged country.

The International Atomic Energy Agency said it would convene the meeting as fighting nears the Zaporozhe plant in southern Ukraine, which sits on the town of Enerhodar on the river Dnieper, and straddles the main Russian invasion lines from the East and the Black Sea.

Energoatom, the operator of the Ukrainian nuclear power plant, has asked the IAEA, a United Nations body, to intervene by imposing a buffer zone of 30 kilometers around its four operational nuclear power plants to protect them from a strike by the Russian forces, which launched a major war in Ukraine last Thursday.

In one declaration to the World Nuclear Association, Energoatom said that columns of equipment and military forces moved near its nuclear power plants, with “shells exploding near the nuclear power plant”, adding that “this may lead to high threats undesirables on the planet”.

As of Tuesday, six of Ukraine’s 15 operating nuclear reactors were disconnected from the power grid to reduce cooling needs, The Ukrainian nuclear regulatory authority has declared. All of the country’s reactors – providing more than half of Ukraine’s electricity – were built when Ukraine was still a Soviet republic, and all are past their initial retirement age.

Control of the Zaporozhe plant has been at stake for days. As of Monday, the Russian Ministry of Defense claimed that it controlled the territory surrounding the plant and that the personnel of the plant “worked on the maintenance of the installation and the control of the nuclear environment”. The remarks were carried by the official Russian newswire RBC, which is now blocked in the west.

But Energoatom categorically denied the claim in a statement to the WNA, calling it “false”. For its part, the IAEA told the Washington Post that “additional information” from Energoatom had established that Russian troops were “operational” near the plant but had not yet entered it.

On Wednesday, numerous Twitter and Radio Liberty accounts reported that largely unarmed civilians took to the highways surrounding Enerhodar in an effort to thwart a brewing Russian attack.

“I continue to follow developments in Ukraine very closely and with great concern,” said IAEA Director General Rafael Grossi. said in a press release. “An accident involving the nuclear facilities in Ukraine would have serious consequences for public health and the environment.”

In addition to the gigantic Zaporozhe, Ukraine operates three other nuclear power plants: that of southern Ukraine in the center of the country, that of Rivne and that of Khmelnytskyi located in the extreme west of Ukraine.

While a direct attack aimed at destroying Ukrainian nuclear reactors seems unlikely to experts, taking control of nuclear power sources is a clear strategic objective of the Russian invaders.

“To put it simply, nuclear power plants are not designed for war zones,” said James Acton, nuclear analyst at the Carnegie Endowment for International Peace. said in a recent report. Ukrainian reactors could, he added, “become targets in a war that will disrupt their operation anyway.”

The imminent possibility of an accidental Russian strike on a nuclear reactor has preoccupied the world since Friday, when Russian troops arrived at Chernobyl, the site of the world’s worst nuclear accident in 1986 and home to storage facilities for spent nuclear fuel. The last of Chernobyl’s three remaining reactors was shut down in 2000 and is currently undergoing a massive decommissioning and decontamination effort.

The Chernobyl site is surrounded by a highly irradiated exclusion zone – an area the size of Luxembourg from which more than 150,000 people were evacuated in the days following the explosion of reactor No. central. Although the area is largely devoid of people, it still requires constant radiation monitoring and will remain dangerous for thousands of years.

The staff at the disused plant, who oversee the spent fuel, have not been relieved since the Russians took over, Reuters reported, citing the IAEA and the Ukrainian nuclear regulator. Ukraine said the Chernobyl workers were hostages, while Russia said they stayed voluntarily.

Whatever their situation, the IAEA insists they need a rest and should be replaced by a fresh and alert group of technicians. Chernobyl specialists are tasked with overseeing 20,000 spent nuclear fuel assemblies that are currently stored in open-air pools – which look exactly like that: pools. These fuel rods will eventually be moved to more protective double-walled dry storage containers designed to last 100 years. In the meantime, the pools – like the reactors – require close monitoring and new supplies of cooling water. Whether that happens now is open to question.

On the day the Russians took Chernobyl, radiation levels picked up by sensors in the exclusion zone appeared to rise significantly, although Ukraine’s regulator reported they were still at safe levels for the area. The IAEA said there was no damage to Chernobyl’s infrastructure – which includes a huge steel protective dome over the remains of reactor number 4 – and the agency postulated that the radiation spikes were caused by Russian tanks and other heavy armor stirring up the irradiated soil. during the siege.

The fragile web that powers the Zaporozhe reactors

According to troop movements, the Zaporozhe plant is the second most vulnerable to Russian invasion. Located 225 kilometers up the Dnepr River from the Black Sea, the plant operates six reactors, three of which according to Ukrainian regulators have been withdrawn from the network. It is the largest nuclear power plant in Europe.

While most reactor vessels – including those built by the Soviets – are designed to take such devastating impacts as a direct hit from a jumbo jet, the infrastructure that keeps them running is painfully vulnerable to stray missiles and to other common military incidents, experts say.

Most vulnerable are spent nuclear fuel pools, which are used to store spent fuel on-site at most nuclear power plants around the world, including Zaporozhe.

Since the pools reside in less robust structures than the well-constructed vessels designed to protect reactor cores, a strike of faulty ordinances could disrupt the flow of cold water needed to keep spent fuel cool. If that happened, Ukraine could soon face some of the dangers that the Fukushima plant faced in 2011.

“A particularly serious risk is that a direct attack could empty the pools in which spent fuel is stored, often in large quantities,” Carnegie’s Acton said. “Without cooling, this fuel could melt, releasing very large amounts of radioactivity.”

Yet other dangers arise from the vulnerability of reactor cooling systems. The Zaporozhe reactors use electricity from the Ukrainian grid to power their cooling systems in case they are forced to shut down. If these power lines are cut, diesel backup generators would kick in to keep the reactors cool, typically for 72 hours.

But after that, in case of circumstances or war, refueling may become difficult or even impossible. Again, the example of Fukushima – whose backup diesel generators were extinguished by an influx of seawater – provides a troubling roadmap for what might happen.

All of this could happen whether or not Ukrainian nuclear workers can get to work. As Acton observes: “For Ukrainian nuclear power plant personnel, even going to work can be a dangerous act, making it potentially difficult to ensure that the reactor can operate safely. »

“In the event of an accident,” he added, “emergency personnel, such as firefighters, might not be able to reach the factory, particularly because they might be involved in recovery efforts. civilian relief”. The IAEA said on Sunday that missiles hit the site. of a radioactive waste storage facility in Kyiv overnight, but there were no reports of damage to the building or indications of a release of radioactive material, Grossi said in his statement. Staff at the facility were forced to take shelter overnight.

The incident came a day after an electrical transformer at a similar facility near the northeastern city of Kharkiv was damaged, but no radioactive release was reported. “These facilities typically contain disused radioactive sources and other low-level waste from hospitals and industry,” the IAEA said.

According to Mycle Schneider, a Paris-based consultant and member of the International Fissile Material Panel, the world has entered unprecedented territory with Russia’s war on Ukraine.

“We have never seen a full-scale war in a country that operates nuclear facilities,” he told the Washington Post.

Bellona will endeavor to update its readers on the status of Ukraine’s nuclear facilities as new information becomes available.