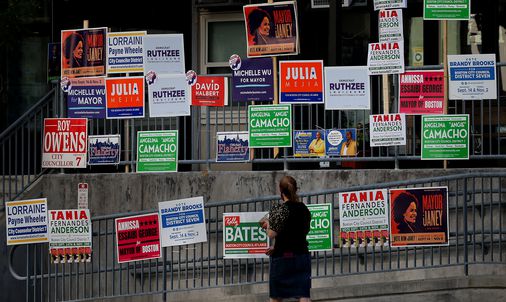 Spring is when most states hold their primaries. This year in Indiana, the Hoosiers will make their primary picks on May 3. In Oregon and Pennsylvania, voters will choose their leading candidates on May 17. New Jersey will have its primary vote on June 7, while New Yorkers head to the primary polls on June. 28.

A total of 29 states will hold their primaries in May or June. (In several states, a runoff, if needed, occurs a month or two later.)

But not in Massachusetts. Bay State voters cannot choose their respective party’s candidates until September 6. Only three states have later dates. Then it will be a two-month, two-day mad dash to the November 8 general election.

Get Weekend Reads from Ideas

A weekly bulletin from the Boston Globe Ideas section, forged at the intersection of “what if” and “why not”.

This cycle of state elections shows how counterproductive our current timeline is. Competitive primary races for governor started relatively late this time around. On the Democratic side, what contest there will only really begin when Attorney General Maura Healey enters the race on Jan. 20. State Senator Sonia Chang-Díaz, the only other plausible candidate currently in the contest, declared her candidacy in June 2021.

So: even in this relatively late-starting political year, primary voters will have more than seven months to consider differences between candidates from the same party – followed by less than a third of that time to choose between possible Democratic nominees. and Republicans.

From a civic perspective, this makes no sense.

Unless you are a holder. Under the current schedule, opposing party challengers have little time to make their case – and voters have a reduced chance to focus on them.

As for the governor’s office, the current schedule does not necessarily confer a long-term advantage to either party, as this high-level office tends to swing between parties.

Where you see the real effect of maintaining the status quo is in the Legislative Assembly. Once in power, most incumbents do not face challenges from members of their own party. The only real risk of re-election they face is in the general election, by a candidate of the opposing party.

A late primary and a truncated general election campaign obviously reduce a challenger’s chances of solidifying his own party and mounting an effective campaign against the incumbent. Compounding these difficulties is our relatively low cap – $1,000 – on the amount an individual can pay to a candidate in any given year. This favors incumbents, who can amass large campaign war chests that chill competition over several years.

So, if one is an incumbent, he or she tends to be quite happy with the current state of affairs.

To illustrate the point — and to distress people at ease — I asked the offices of Senate Speaker Karen Spilka, who sometimes nods in favor of reform, and House Speaker Ron Mariano, a insider of an insider, if they would support a change to a primary spring.

Suffice it to say, trying to get a comment from either of these worthies feels a bit like Adele singing her 2015 big hit, “Hello From The Other Side I must have called a thousand times!?”

Spilka’s office at least bothered to develop a dodge: “Throughout her career, the Senate Speaker has been committed to expanding the franchise and is currently focused on enshrining popular expanded voting options. in the law.”

But what about a spring primary? Hello? Hello? It’s no secret that I’m running out of time.

None of this distracts or diverts Mariano’s attention! Surely not. That’s not how the good old Beacon Hill guys do things. His office simply ignored my request.

This illustrates the political problem of achieving this voter-friendly reform: the very people who would need to change the system benefit.

Unless voters take matters into their own hands.

By a question on the ballot. It would be a great cause for a good government organization or an intrepid group of reformers hoping that Massachusetts politics works for voters rather than incumbents.

It is an idea whose time has come.

But not here in Massachusetts, where protection in place remains the name of the insider game.

Scot Lehigh is a columnist for The Globe. He can be contacted at [email protected] Follow him on Twitter @GlobeScotLehigh.