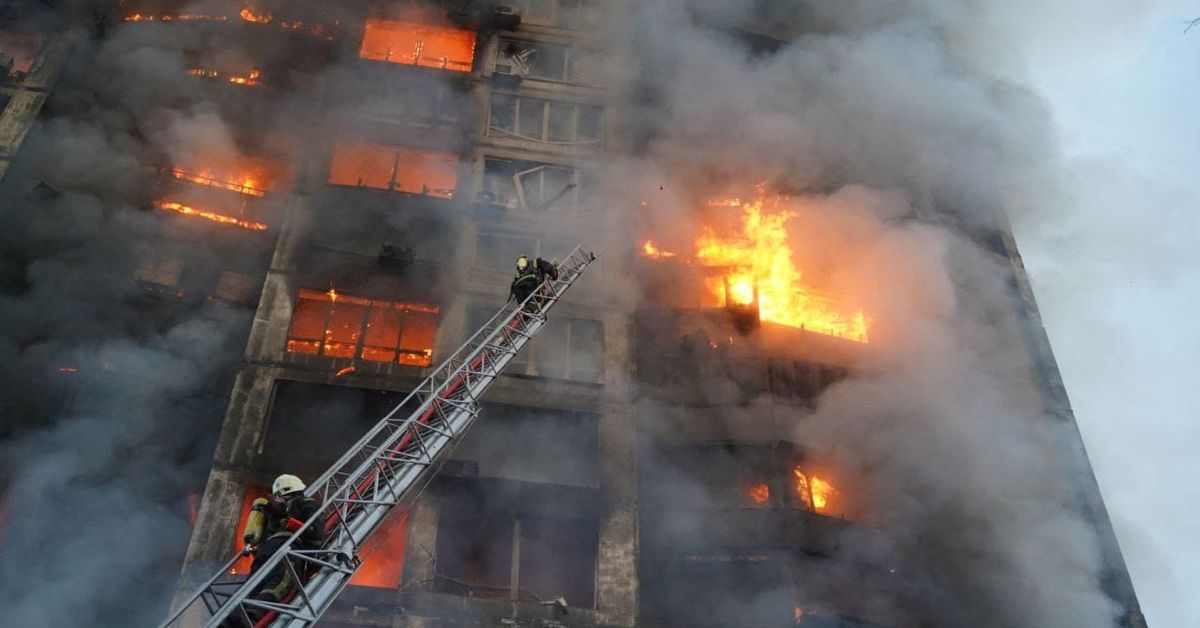 LVIV, Ukraine/KYIV, March 15 (Reuters) – Russian airstrikes and artillery fire rained down on buildings in the Ukrainian capital of kyiv on Tuesday as invading forces tightened their grip, while a convoy of civilians was leaving the beleaguered port city of Mariupol for safer quarters.

At least five people were killed in the shelling of kyiv on the 20th day of the Russian assault, authorities said. Buildings were set on fire and people were buried under the rubble.

Despite the danger, the leaders of Poland, Slovenia and the Czech Republic have arrived in the city as a sign of solidarity with its people.

Evacuations of civilians from towns attacked by Russian forces have accelerated. About 2,000 cars managed to leave the port city of Mariupol and a similar number were waiting to follow, the local council said.

But a supply convoy for Mariupol, whose residents have taken shelter from repeated Russian shelling and are in desperate need of food and water, has been blocked in nearby Berdyansk, Deputy Prime Minister Iryna Vereshchuk said.

Talks between the Russian and Ukrainian delegations via video link resumed on Tuesday. Ukrainian officials expressed hope that the war could end sooner than expected, saying Moscow could come to terms with its failure to impose a new government on kyiv by force.

In a hint of compromise, Ukrainian President Volodymyr Zelenskiy has said kyiv is ready to accept security guarantees that stop short of its long-term goal of joining the NATO alliance, to which Moscow opposes.

NATO chief Jens Stoltenberg announced that the leaders of its members would meet in Brussels on March 24 to discuss the invasion and show their support for Ukraine.

“At this critical time, North America and Europe must continue to stand together,” Stoltenberg said.

US President Joe Biden will attend, the White House said.

Prime Ministers Mateusz Morawiecki of Poland, Petr Fiala of the Czech Republic and Janez Jansa of Slovenia traveled by train to kyiv, the first foreign leaders to pay such a visit since Russian President Vladimir Putin ordered the invasion on 24 February.

“We must stop the tragedy unfolding in the East as soon as possible,” Mateusz Morawiecki wrote on Facebook.

Their visit was a symbol of Ukraine’s success in repelling an assault that Western countries said aimed to seize the city a few weeks ago.

About half of Kyiv’s 3.4 million people have fled and residents are sheltering overnight in metro stations.

Two powerful explosions shook kyiv before dawn on Tuesday and tracer gunfire lit up the night sky. A building was in flames after being hit by artillery. Read more

Sitting on the ground outside, Igor Krupa said he survived because he slept under a makeshift shelter made up of furniture and metal weights.

“All the windows went out and all the debris came into the apartment,” he said.

But despite reducing parts of the cities to rubble, Russian forces failed to capture any of Ukraine’s 10 largest cities.

Yet hundreds of civilians have been killed and nearly 3 million people, mostly women and children, have fled Ukraine to take refuge in neighboring countries. Zelenskiy said on Tuesday that 97 children had died in the invasion so far.

At the Romanian border, a woman named Tanya said she had fled the southern frontline town of Mykolaiv to save her child. “Because the people who are there now are Russians, Russian soldiers, and they are killing children.”

Zelenskiy, who has won admiration in the West for his leadership under fire, called on Russian troops to surrender.

“You won’t take anything from Ukraine. You will take lives,” he said in a video message. “But why should you die? Why ? I know you want to survive.

He also indicated that Kyiv might be ready to compromise on its aspirations to NATO membership, a goal that has annoyed Moscow.

“If we cannot enter through open doors, then we must cooperate with the associations with which we can, which will help us, protect us… and have separate guarantees.”

Kremlin spokesman Dmitry Peskov said it was too early to predict the progress of the talks: “The work is difficult, and in the current situation the very fact that (the talks) are continuing is probably positive. “.

One of Zelenskiy’s top aides said the war would be over in May or even in a few weeks, with Russia running out of fresh troops.

“We are now at a crossroads,” Oleksiy Arestovich said in a video. He said he expected either a peace deal within a week or two or another Russian attempt with new reinforcements, which could prolong the conflict for another month.

At the United Nations, Russian envoy Vassily Nebenzia said Moscow would end what he called its “special military operation” once its goals were achieved.

THE WAR IS TAKING PLACE

In Rivne, western Ukraine, officials said 19 people were killed in a Russian airstrike on a television tower. If confirmed, it would be the worst attack on a civilian target to date in the northwest where Russian ground troops have yet to march.

More than 100 buses carrying a few thousand civilians have left Sumy, a besieged city in the northeast, as part of a “safe passage” operation, the International Committee of the Red Cross announced on Tuesday. They were heading towards Lubny in central Ukraine after the Russians gave the go-ahead for evacuation.

Russia said it now controls the Kherson region in southern Ukraine. Reuters could not independently verify the report.

The conflict has isolated Russia economically. The United States, the European Union and Britain announced new sanctions on Tuesday, while Moscow retaliated by placing Biden and other US officials on a “ban list” that prevents them from entering Russia.

The latest EU sanctions included bans on investments in the energy sector, exports of luxury goods to Moscow and imports of steel products from Russia.

They are also freezing the assets of more business leaders believed to be supporting the Russian state, including Chelsea football club owner Roman Abramovich. Read more