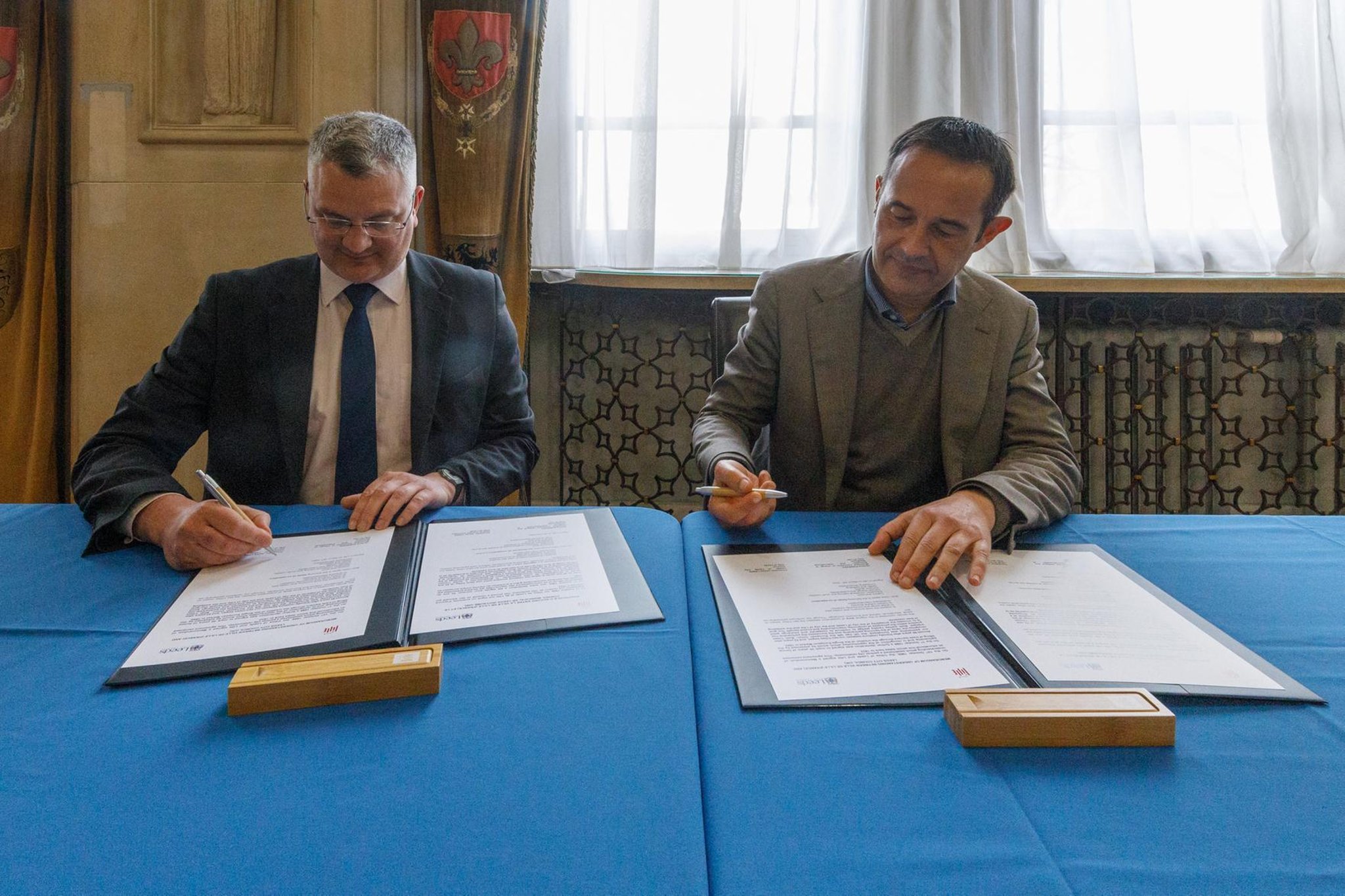 Leeds has been twinned with Lille for over 50 years and the two cities have worked closely together on a range of artistic, educational and commercial projects during this time.

Following the UK’s exit from the European Union, the partner cities have signed a new Memorandum of Understanding as part of efforts to maintain and strengthen cooperation in the wake of Brexit.

Register to our daily newsletter

The newsletter mute the noise

The memorandum promises that Leeds and Lille will work together on a number of areas of cooperation – including youth mobility, health and wellbeing, climate change and inclusive growth – with a view to supporting local economies, create jobs, strengthen social cohesion and encourage cultural diversity.

Council leader James Lewis traveled to Lille on Tuesday for the signing ceremony and was joined by Jérôme Pianezza, councilor in charge of international relations for the northern French city.

Councilor Lewis said: “It was an honor to represent Leeds at the signing ceremony and to confirm our continued support for the relationship we have had with Lille for over half a century.

“The ceremony comes at a time when tragic events elsewhere in Europe are a reminder of the importance of understanding and shared values, and I thank everyone in Lille for the warm welcome extended to me.”

Councilor Lewis and Mr. Pianezza then had discussions on a number of topics, including the Ukrainian refugee crisis.

The human cost of the Russian invasion was particularly felt in Lille, which counts the Ukrainian city of Kharkiv in Ukraine among its other partners.

Mr Pianezza said: “The City of Lille is very pleased to have welcomed Con Lewis, President of Leeds City Council, to renew the historic cooperation between Lille and Leeds.

“Fifty-four years after the formalization of our partnership, our two cities wished to reaffirm, by signing a new cooperation agreement, the links and exchanges of good practices that unite us, despite Brexit.

“As City Councilor responsible for International and European Relations, I attach particular importance to the relationship with Leeds and intend to strengthen this cooperation and our common values ​​and ideas in no less than six areas of cooperation: climate change and the city sustainability, education, training and mobility of young people, culture and sport – including the theme of sustainable culture – and the fight against discrimination.

The relationship between Leeds and Lille was originally formalized by two twinning ceremonies, one held in France in October 1968 and the other at Leeds Municipal Hall the following April.

Since then, regular exchanges involving young people, academics and companies have taken place between the cities.

Councilor Lewis added: “We are very proud of our links with Lille and our other partner cities around the world. These links add an extra dimension to many aspects of life in Leeds, including culture, sport, education and business.

“Sharing knowledge and know-how is a great way to bring people from different countries together, here are the next 50 years of our friendship with Lille.

The signing of the memorandum was also welcomed by Dame Menna Rawlings DCMG, Her Majesty’s Ambassador to the French Republic.

“I am delighted that the historic cities of Lille and Leeds have agreed on a new memorandum of understanding to define their future partnership,” she said. “French and British cities have everything to gain from working together to enrich their communities and tackle common challenges.

“The British Embassy will continue to support efforts to strengthen regional ties between the UK and France. I am certain that the next 50 years of the Lille/Leeds relationship will be exciting.

The 50th anniversary of the official launch of the Leeds-Lille partnership was marked in 2018 with a tree-planting ceremony at Temple Newsam and an exhibition at Leeds Town Hall.

Last year, Leeds underlined its commitment to cooperating with partners across Europe by signing updated memorandums of understanding with two more of its twin cities – Dortmund in Germany and Brno in the Czech Republic.

The basic concept of establishing formal links between towns in different countries dates back hundreds of years, but the popularity of town twinning really began to grow in the mid-20th century, as communities across Europe sought to establish new cross-border connections and heal the scars left by the Second World War.