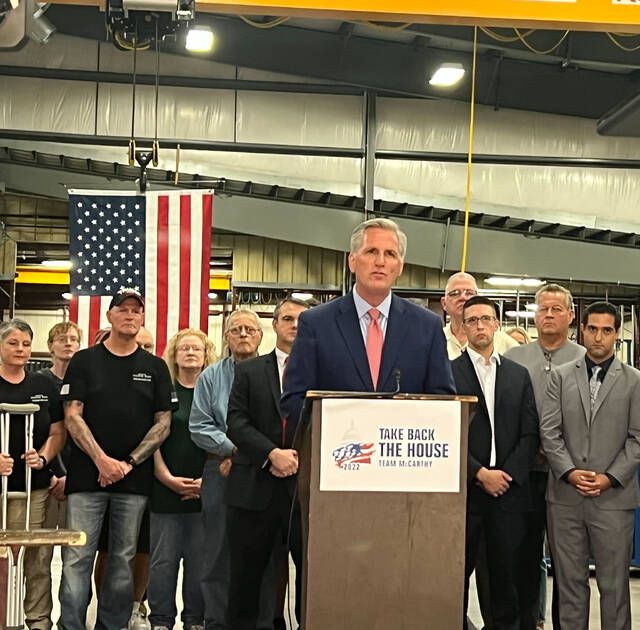 They didn’t mince words in their remarks, taking aim at House Speaker Nancy Pelosi, Rep. Matt Cartwright, D-Moosic (the Bognet contest), Biden and the Democratic Party as a whole, amid a gathering of local Republican elected officials, Don’s Machine Family and store employees, and other supporters.

In his opening remarks before introducing McCarthy, Bognet first thanked boutique owner Donnie Eifert and everyone present. He then immediately shifted gears, saying, “Joe Biden came here on Tuesday and he blurted out a truth that my opponent Matt Cartwright tried to hide. Joe Biden said ‘The real reason I’m here is for Matt Cartwright’. He knows that when I defeat Matt Cartwright in Biden’s hometown of Scranton, Pennsylvania, it will send an unequivocal signal to the country that we have rejected the liberal Biden-Cartwright agenda in Biden’s hometown.

It should be noted that while press releases mentioned that the event was based in Scranton, and Scranton was mentioned a few times during remarks as an obvious attempt at a show of force in Joe Biden’s hometown of West Pittston n It’s not in Scranton, of course, or even the same county.

Oil prices, the southern border, spending, the economy and public safety were all topics of discussion in the remarks prepared by Bognet and McCarthy.

Bognet quoted the fictional presenter from the 1976 film Network who said, “We’re mad as hell, and we ain’t gonna take it no more.”

Continuing, he said: “We are mad with rage that Nancy Pelosi, Matt Cartwright and Joe Biden got rich during their tenure and do not represent working class Pennsylvanians, but instead mock us for hanging on to our guns. and our religion, as they teach us how to drive Teslas when they come and go from DC in a private jet.

Concluding his speech, Bognet introduced McCarthy as “the man who will be the next Speaker of the House when we win a majority in November.”

McCarthy’s remarks followed a presentation of “facts” with explanations following. “In fact,” he said, “families go to the grocery store and find empty shelves.” While later alleging, “Democrats are spending your money on wasteful projects, including millions on ski resorts and fancy hotels.”

He criticized the Biden administration for sending stimulus checks to violent criminals, including the “Boston Bomber.” He alleged that while children and families were kept at home under COVID-19 lockdowns, Democrats were dining out. McCarthy spoke at length about the country’s drug problem, linking it to lax border policies and wondering, “Why isn’t the White House treating this like the crisis it is?”

McCarthy addressed President Biden’s scheduled speech for Thursday evening, saying, “When the President speaks tonight at Independence Hall, the first lines of his mouth should be to apologize for slandering dozens of millions of Americans by calling them ‘fascists’.” He later noted that the president speaking at such a historic venue for American democracy was unfit because Joe Biden and the Democrats in Congress were “threats to American democracy.”

McCarthy then moved his remarks to speak of “the soul of America,” noting that said soul is made up of hard-working individuals who love their children and provide for their families.

“The soul of America is not the ruling class in Washington. This is the law-abiding, tax-paying American citizen,” he said.

In conclusion, McCarthy declared his intention to get the country back on track, promising affordability, rising wages, a stable economy, security, education, and “restoring America’s soul, America’s Values ​​and America’s Promise”. .”

Bognet told reporters afterward that he and McCarthy were heading for Moosic, saying they were “taking the fight to Cartwright’s backyard.”