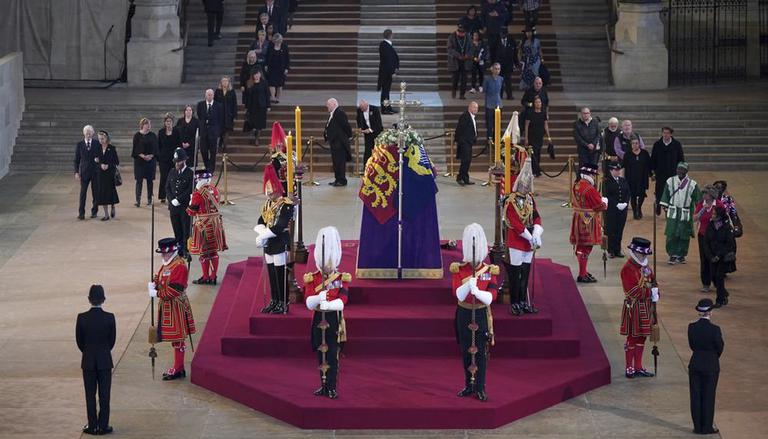 The coffin of Britain’s longest-serving monarch, Queen Elizabeth II, lies in state in Westminster Hall after its final journey from Buckingham Palace in London on Wednesday.

King Charles III and his sons Princes William and Harry joined in a mournful procession as the coffin of the late monarch left her official London residence to be carried to the historic hall of the Parliament complex to lay in state until the state funeral at nearby Westminster Abbey on Monday.

Members of the public began filing at 5 p.m. local time and will have until 6.30 a.m. on the day of the funeral, by which time several thousand people are expected to have lined up for hours to pay their respects to the Queen.

At 2:22 p.m. local time on Wednesday, the coffin placed on a horse-drawn gun carriage of the King’s Troop Royal Horse Artillery began its ceremonial procession of less than two kilometers to the Palace of Westminster.

The Queen’s heir apparent Charles and his grandchildren William and Harry walked side by side behind the coffin, with shots from Hyde Park and Big Ben ringing out on a somber journey. The Queen’s other children, Princess Anne and Princes Andrew and Edward, were also among the royals in the motorcade behind the car.

Thousands of people lined the route of the procession, which passed the Mall on its way to the Palace of Westminster by the River Thames.

The coffin was received at Westminster Hall by the Archbishop of Canterbury, the Reverend Justin Welby, to perform a short service attended by the Very Reverend Dr David Hoyle, Dean of Westminster. This ceremony was joined by other members of the royal family, including Kate, Princess of Wales, and Meghan, Duchess of Sussex, as the coffin was placed on a catafalque or raised platform.

On Tuesday night, the coffin spent its final night in Buckingham Palace’s Bow Room for the most private part of the ongoing state mourning since the Queen’s death in Scotland last Thursday.

Earlier on Tuesday, crowds filled the streets of Edinburgh as a motorcade carried the coffin to the airport after it was placed on display at St Giles Cathedral in the Scottish capital. There was applause as the coffin left the cathedral, where thousands of people have passed since Monday to pay their respects to the late monarch.

The Scottish government said more than 33,000 people paid their respects in Edinburgh before the coffin was transported by road to Edinburgh Airport. He was flown to London, accompanied by the Queen’s daughter, Princess Anne, on a Royal Air Force (RAF) plane which was used to evacuate thousands of people fleeing the Taliban in Kabul the last year. The C-17 Globemaster was also used to deliver humanitarian aid and weapons to Ukraine after the Russian invasion.

The plane landed at RAF Northolt before being taken to Buckingham Palace, where it was greeted by King Charles and Queen Consort Camilla along with other members of the Royal Family. He was received by a guard of honor – trained by the King’s Guard – before being taken to the bow room inside the palace to be guarded overnight by a rotation of chaplains.

Earlier on Tuesday, King Charles left Scotland for Northern Ireland as part of his Operation Spring Tide state mourning tour of different parts of the UK. He visited Belfast for the first time as a monarch and met Northern Ireland’s political and religious leaders and took part in a prayer service at St Anne’s Cathedral.

“Now, with this shining example before me, and with God’s help, I take up my new office resolved to seek the welfare of all the people of Northern Ireland. During the years of my mother’s reign, it was a privilege to bear witness to such a dedicated life. May it be granted to all of us to fulfill the tasks ahead of us so well,” he said in a brief statement.

The King is due to travel to Wales at the end of the week ahead of scheduled ceremonies and audiences as world leaders start arriving in the UK for the state funeral at Westminster Abbey on Monday morning.

Queen Elizabeth II died peacefully at the age of 96 at her summer residence at Balmoral Castle in Scotland on Thursday.