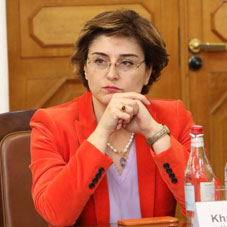 Khatuna Samnidze, the leader of the “Republican Party”, after the meeting with EU Ambassador’s Advisor Julien Crampes, Court Program Manager Anne-Bridget Hansen and US Embassy Political Officer Evan Elliott , regarding the realization of the 12 recommendations for Georgia to receive the candidacy for the European Union , told the media that the meeting was initiated by the partners of Georgia and that they are ready to closely observe the process so that Georgia obtains candidate status:

“It is in the interest of our partners that the 12 recommendations are fulfilled as far as possible and that the country is able to receive the status – of course they will observe this process very closely and try to support as much as possible all those who participate in this process – said the leader of the “Republican Party” Khatuna Samnidze.

“The meeting was initiated by our partners, the European Union, and there was also a representative from the United States of America. The main topic was the process of implementing the 12 recommendations – how we, our political group , “Republicans” and “Agmashenebeli Strategy” see this process, why and with what arguments we are not involved in the main process, why there is a parallel process and how we see the unification of these processes in committee hearings , where specific initiatives and legislative projects of the “Georgian Dream” of the working groups, as well as legislative projects of the opposition will be presented.

Of course, it is in the interest of our partners that the 12 points are fulfilled as much as possible and that the country can obtain the status – it is in the interest of our partners, and of course, when we, who do part of the opposition, refused to participate in the working process, one of the main arguments was that “Georgian Dream” did not specify what the decision-making process and mechanism would be. They also did not specify what would be the criteria for involving experts and non-governmental organizations working on a specific topic in this process.

The refusal of “fair elections” is proof that “Georgian Dream” only wants to conduct the process with its own interest, that of one party, to discredit all non-governmental organizations and opposition parties which do not disagree with his positions. It is normal to criticize any decision of an NGO. This is proof that “Georgian Dream” does not intend to make the process inclusive and only intends to have its own associates in this process and make decisions with its own interest of a party – it is dangerous, it is a measure taken against the interests of the country,” Samnidze said.