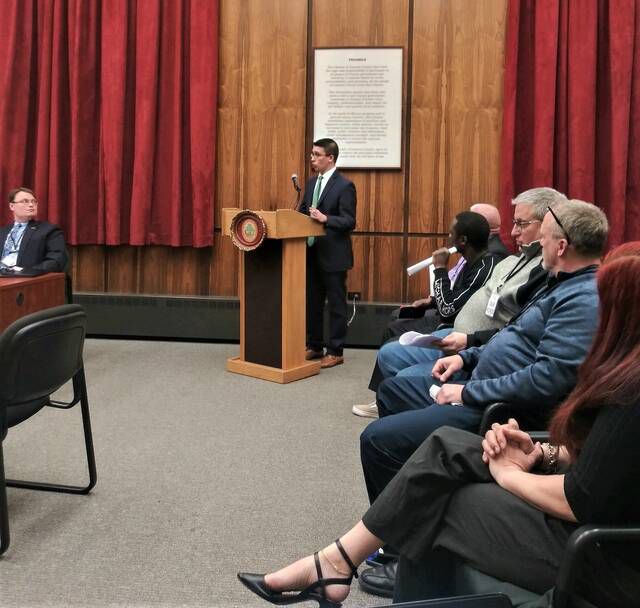 The Board also approved proposals to allocate US bailout funding to the County Flood Protection Authority and the North East Pennsylvania Land Bank Authority, but chose not to act on another proposal to allocate at this time. up to $20 million to provide small business grants.

Many appointments have also been made to external boards, authorities and commissions.

Bienias, 34, of Hanover Township, has a bachelor’s degree in business administration with a minor in political science from King’s College and earned a law degree from Widener University School of Law.

He is licensed to practice in the state Supreme Court and works for a law firm assigned to cases throughout the state.

Bienias will serve until January 2, 2024 and will receive $8,000 per year. Twelve Republicans interviewed publicly for the seat.

Speaking in public comments, Bienias said he was “honoured” to be appointed and looked forward to taking up his duties immediately.

As part of a board on the manager selection plan adopted on Tuesday, the board will hold a closed executive session on March 3 to review the results of background checks, candidate resumes and other information provided by the research committee.

The Board will contact applicants on March 4 to schedule in-person interviews to take place the week of March 14.

After the board interviews are complete, board members plan to hold another executive session on March 21 to discuss the interviews and their ranking.

If all goes as planned, the hiring vote will take place the following evening, March 22. Seven of the council’s 11 votes – a majority plus one – are needed to hire the director.

Council approved an allocation of up to $8 million to the Flood Protection Authority, which oversees Wyoming’s Valley Levee along the Susquehanna River.

In exchange, the authority has agreed to give a discount of at least 10% to fee payers this year and undertakes not to increase fees for three years.

Some council members had advocated for a greater levee fee reduction, but the council ended up unanimously approving the allocation to keep the flood control system strong.

The authority will not be allowed to raise funds until the county verifies that the work meets federal eligibility criteria.

The Land Banks Administration, a regional entity focused on blight reduction, will receive a $500,000 allocation. It covers Pittston, Jenkins Township and the boroughs of West Pittston, Duryea and Avoca.

It is unclear whether the council will reconsider the proposal to allocate grants to small businesses. Council members offered mixed reactions to the proposal, with some saying they want to continue looking at all options for spending the funds.

Prior to Tuesday’s postings, the board had allocated nearly $5 million of its $113 million in US federal bailout funding — $924,000 to cover its transit games and $4 million for repairs to the county jail and information technology needs. The county doesn’t have to commit to an American Rescue stipend plan until the end of 2024 and has until the end of 2026 to spend the money.

The county administration proposed the $20 million allocation to help businesses with up to 19 employees weather staffing challenges, inflation and the lingering effects of the COVID-19 pandemic.

The Council nominated Danny Schramm to fill a Democratic position on the County Elections Committee, which oversees elections, but he was unable to fill the Republican seat due to the split over the selection.

With Councilman Tim McGinley absent and Bienias yet to be sworn in, nine members of council were able to vote.

A majority – five – voted to reappoint Richard Nardone to the seat, but six votes are required for board appointments. The other four supported Alyssa Fusaro.

Nardone, of Slocum Township, is a semi-retired pilot and consulting business operator after more than 40 years in human resource management, labor relations and general operations management.

Fusaro, from Lucerne, is a medical courier and was previously a branch manager for a large insurance company.

Fusaro took to the podium during public comments ahead of Tuesday’s vote and urged the council to nominate her.

The council voted a second time to see if any votes would change, but they did not.

The Board has tabled a decision on the nomination until the next meeting, when Bienias can vote and McGinley can be present.