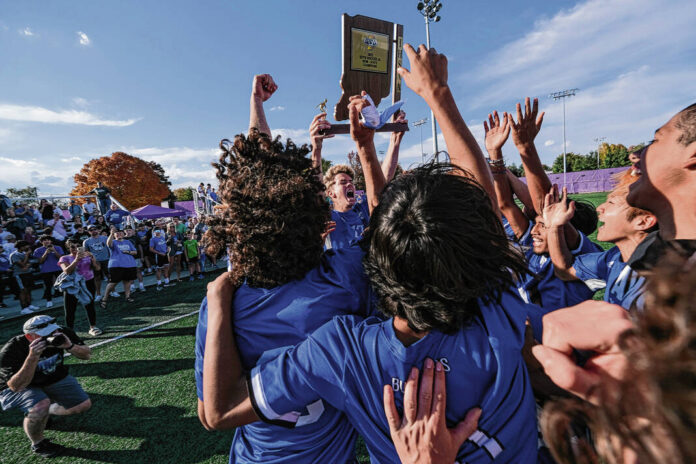 SEYMOUR — Columbus North rode in the first half of Saturday’s Men’s Soccer Semi-State, but the Bull Dogs didn’t let that become a downside.

Instead, they turned it into an advantage.

Class 3A No. 4 North used a first-half goal from Thomas De La Cruz and a late count from Aidan Whitley and held on for a 2-1 win over Cathedral to return to the state final for the first time since winning the title in 2012. .

North coach Andy Glover noted that playing upwind helps the Bull Dogs play on the ground rather than in the air.

“So that really helped us,” Glover said.

The wind actually helped North’s first goal. In the 33rd minute, second Thomas De La Cruz played a ball from the left side into the box that appeared to be headed wide, but the wind held it up and it bent into the right side of the net.

“It was supposed to be a cross, but it bounced back and it hit the back of the net,” De La Cruz said. “I was looking for Raul’s (Oliveria) fullback. It wasn’t there, but it went in.

“It means a lot,” De La Cruz said. “My sister passed away recently and I was playing for her. It’s my biggest inspiration. Before every game, I have this cross that his grandmother gave me, and I always make the sign of the cross and pray to God.

North had a few chances to extend their lead but only did so in the 79th minute. Aidan Whitley took a touch from De La Cruz and beat Irish keeper Jett Wallmeier.

“It turned out to be pretty big, but at that point it was just another goal,” Whitley said. “Initially I was going to try to take him in the corner and (take) time, then the (defender) was on my right shoulder. I knew if I turned left I could manage to get on target. So I turned left, saw the man on top of me, tried to make a move around him and it finally worked.

Whitley’s goal proved huge when Cathedral’s Calvin Kurzawa converted a penalty with just 24 seconds left after a scramble in front of the net.

The game wasn’t over yet, however. The Irish (10-8-5) picked it up and fired a shot which was saved by Max Grewe, then placed another shot over the crossbar as the closing seconds ticked away.

Shooting totals were nearly dead even. The Bull Dogs finished with a 14-13 advantage on total shots, and both teams had eight shots on goal.

Oscar Ballinas made four saves playing the first half in North’s goal. Grewe finished with three saves in the second half. Unfortunately for the Bull Dogs, Ballinas will not be available for the national final after being shown a red card for coming off the bench on the pitch during the skirmish in the dying seconds.

North also got big plays from their backline from left-back De La Cruz, centre-backs Konnor Gribbins and Eduardo Ruiz Cordova and right-back Oliveria in the absence of starter Leo Iorio with an ankle injury.

“The cathedral kept throwing balls at us,” Glover said. “They knew where to put pressure on us, and I can’t disagree with their approach at all. It worked well for them.”

The Bull Dogs are now one win away from a state title after being eliminated in the section for the past five years.

“It was weird because where we finished last season didn’t match what we saw in the team’s potential in terms of the cap,” Glover said. “All we’re looking for is our best performance. If we achieve our best performances, we are very difficult to beat.