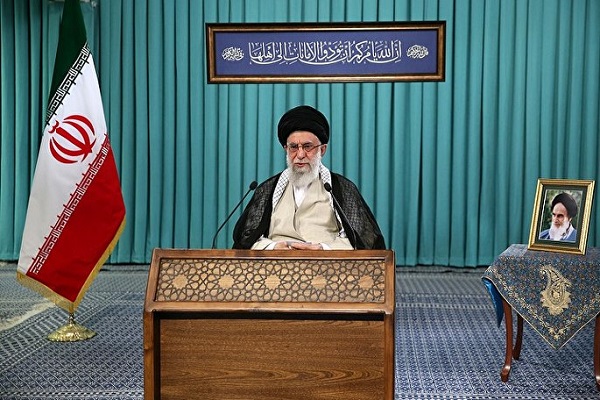 Just days away from the presidential elections and the municipal and municipal elections, Imam Khamenei addressed the Iranian nation via a televised speech this Wednesday, June 16, 2021.

Imam Khamenei said that the purpose of satanic powers is to separate the people from the Islamic Republic. He said: “For a few months now the American and British media have been trying to reduce the presence of the people at the polls. Of course, experience has shown that the people did the opposite of what the enemy wanted. It will be this time too, God willing.

According to Khamenei.ir, the leader of the Islamic Revolution added, “Those who discourage people from participating in elections are trying to weaken the Islamic government in order to turn the country into a parade ground for terrorists.”

Imam Khamenei pointed out that low turnout would lead to increased pressure from the enemy. He said, “The people’s support for the system must be shown to the enemy.

Describing Iran as a rich and powerful country, Imam Khamenei said: “If the new president is elected by a significant majority of votes, he will be a powerful president and can accomplish great tasks. Our country has the capacity to do many things. To benefit from this capacity, you need strong people who enjoy broad popular support.

He pointed out that the country’s elections have always been sound. What proves this statement is the fact that the presidents who have been elected in the country have had different orientations and preferences. This shows that elections in Iran are not based on a certain political orientation. Describing the upcoming election as a competitive election, he said that the differences of opinion and disagreements among the presidential candidates on various issues, as shown in the televised debates, are proof that the Iranian elections do not follow. not a specific direction.

He referred to the opposition of enemies to the elections in Iran since the beginning of the Islamic revolution and to the referendum for the Islamic Republic held in Iran. At the same time, he also indirectly criticized some Arab countries, which act against the Islamic Republic. He said: “It is interesting to note that some countries are run on the basis of tribalism in the 21st century and they have never had elections. People in these countries don’t even know what a ballot box is. But these countries launch a 24-hour TV channel to say that the elections in Iran are not democratic.

Imam Khamenei described the Iranian nation as a powerful nation that was able to perform great feats such as leading the Islamic Revolution, establishing the Islamic Republic and winning the imposed war. He referred to the manufacture of the coronavirus vaccine by the Iranian youth as another example of the great achievements of the Iranian nation despite the wishes of its enemies and said that they did not wait to receive this from the selfish hands of foreign powers. Imam Khamenei also spoke of Iran’s success in obtaining the technology needed to enrich uranium to 20% for the purpose of making radiopharmaceuticals. He said, “This nation cannot be discouraged.” Those who make unreasonable analyzes of the situation leading to the despair of the people are doing something very wrong.

At the end of his remarks, the Leader of the Islamic Revolution had some advice for the organizers of the elections. He said: “First of all, they must take the necessary precautions so that the people can participate in the elections without their health being in danger. Second, they should eliminate the problem of shortage of ballots in elections, as happened in previous elections. They should distribute the ballots to the election centers in time so that no center faces a shortage of these ballots. Third, we have heard that not all the necessary preparations have been made overseas. I ask the Ministry of Foreign Affairs and the Ministry of Interior to make serious efforts to correct this situation and help Iranians who wish to participate in elections in foreign countries to be able to do so.