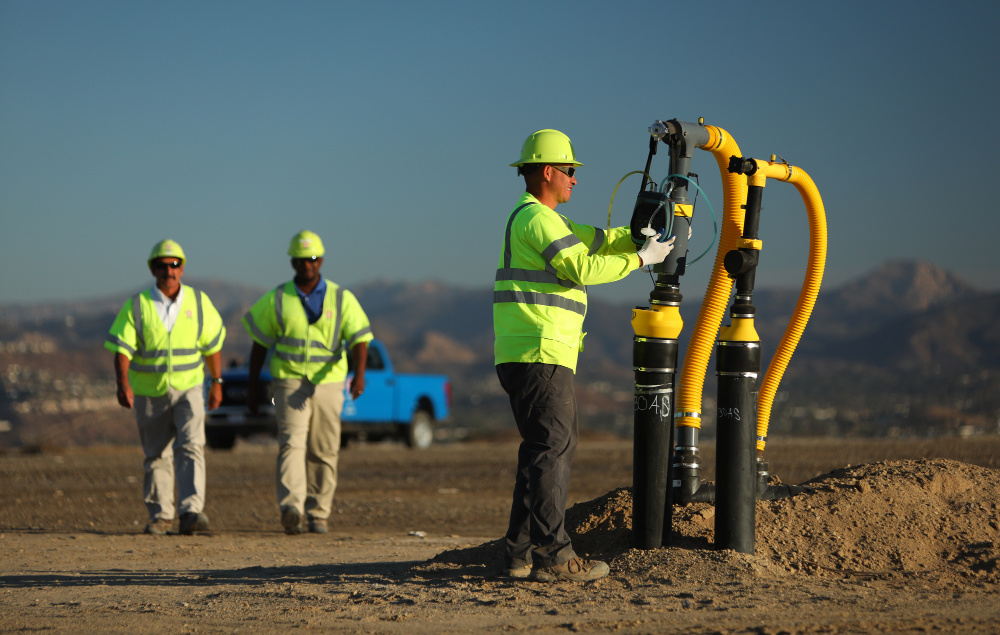 HOUSTON—Landfills can be hotspots for methane emissions, but waste management and recycling companies like Republic Services are converting that methane into renewable natural gas (RNG).

The Phoenix-based company is working with Archaea Energy, the RNG producer that is acquired by BP in a $4.1 billion dealto develop 40 RNG projects in 19 states.

“We were looking for quick time to market and the JV path was all about speed to market,” said Pete Keller, vice president of recycling and sustainability for Republic Services, describing the company’s relationship. with Archaea. “When we think of a portfolio of 40 projects with the intention of bringing them all online by the end of 2027, that will represent a significant amount of new RNG available for the market.”

Together, the projects are expected to generate over 12.5 MMBtu of RNG per year. With the goal of completing approximately eight such projects per year, permitting, engineering and equipment procurement are underway as developers continue to line up construction teams.

“There are many opportunities today to produce renewable natural gas, biomethane, from a variety of sources, and landfills play an important role.” – Pete Keller, Republic Services

“I think we’re shooting dirt right now on two or three projects,” he said. “So there are boots on the floor.”

More action could be on the way for Republic Services as it seeks to capitalize on the RNG growth engine, while doing its part to reduce emissions.

Keller, whose comments have been edited for length and clarity, sat down with Hart Energy last week at the Reuters Energy Transition North America conference to talk about the future of RNG and other potential areas of growth of decarbonization and environmental services on the company’s radar.

Velda Addison: What do you think of the future of renewable natural gas?

Pete Keller: We see renewable natural gas as a transition fuel. There is a lot of talk about a hydrogen economy or electrification, a cleaner grid, and we think that’s all part of the future as well. But we can’t get there overnight. There are many opportunities today to produce renewable natural gas, biomethane, from a variety of sources, and landfills play an important role. I think about 69% of what’s available in the North American renewable natural gas market comes from landfills. So that’s the outsized part of the market today.

With the projects we’ve announced and others in our industry have announced, we’re going to see that share of landfill gas-derived biomethane increase over time. There are investments elsewhere—dairy, hogs, and sewage treatment. All of these projects also have a role to play and, from a carbon intensity perspective, some of these projects have a better profile. I’ve seen hog projects with a carbon intensity of -200 to -300. When you think about some of the incentives that are out there, some of the low carbon fuel markets, California in particular, those markets value that type of fuel more than they value landfill gas. But the carbon intensity of landfill gas is on average 70% lower than that of diesel. So that’s pretty important in the journey to a low-carbon future.

VA: Are acquisitions a possibility in the RNG space for Republic?

PACK: I think so. Insofar as we continue to be long in our traditional lines of business. I wouldn’t be surprised if by the end of the decade we had more landfill assets and those landfill assets usually came with some form of gas gathering. Whether there is a renewable energy project there or not, we would have to take that on a case-by-case basis, but definitely more opportunities over time.

VA: Do you see any other opportunities to work with BP now that it is acquiring Archaea?

PACK: I think so. Now I haven’t been involved in any direct conversations with BP management and of course the deal is not done yet. But a simple example that I would use is that we have made significant investments in recycling plastics, and there are a lot of leaks happening in our ecosystem with opportunities to capture plastic. When was the last time you saw a recycling bin at the gas station? Like never. Think of BP’s footprint on service stations. A partnership with BP could be a really interesting opportunity to capture more plastic at these service stations. It’s something we need to talk to them about and work on, but it’s just one example of what a universe of opportunity could be.

VA: What other areas of decarbonization and environmental services does Republic find attractive?

PACK: We are long on electrification. We have the fifth largest professional fleet in the country. That’s a pretty big footprint of vehicles, and they’re Class A heavy-duty vehicles. So 21% of our vehicles today are CNG; 26% of our fuel consumption is natural gas; and 100% of this consumption is renewable natural gas. So we’re part of what’s driving these pathways in transportation fuel today. Obviously, we have a lot of opportunity with 74% of our fuel consumption coming from fossil fuels. We have many opportunities to decarbonize our fleet over time, and we believe this is also important for our customers. We’re piloting EV in a few different markets today. We have eight trucks on the road that we drive daily. I think we expect to have a dozen more before the end of this year. So these are initiatives that we are pushing forward, and we envision maybe 30% of our fleet being electrified by the end of the decade.

The other area of ​​opportunity for us is the circular economy. We are one of the largest recyclers in North America and we touch a lot of materials. We send literally millions of tons of manufacturing raw materials back to market, be it cardboard, paper, aluminum, tin, various grades of plastic and glass. All of this is really important. Every time you use a reclaimed or recycled raw material in a manufacturing process, it’s a much lower carbon impact and much lower greenhouse gases. The most striking example is aluminum. For every ton of aluminum recycled, you avoid nine tons of carbon. So there’s a very good story of avoided carbon in recycling, and we believe that over time, the market, the customers, the manufacturers, the producers, the brands, they’re all going to value this material more future than they have historically.

Were [also] looking at sequestration opportunities with CO₂, but that would be geological sequestration, a proven downhole type of thing. … We are starting to extract more and more organic fractions in some markets for food waste, green waste, deliberately cleaning these materials and producing a sludge that can be delivered to anaerobic digestion facilities that produce biogas and ultimately put this gas on the market. We do more every year. California is a big emerging market for us. Washington, Oregon, Minnesota and Massachusetts will be, but they are early innings.