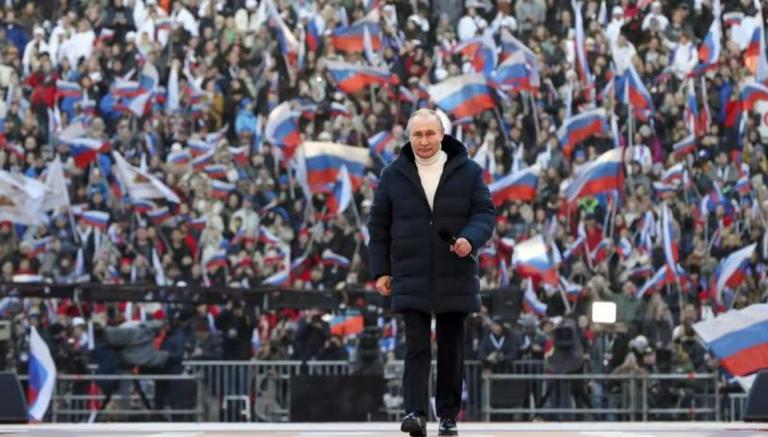 A rare public address by Russian President Vladimir Putin on Friday was abruptly cut off during the broadcast. In the speech at a pro-Russian rally at Moscow’s Luzhniki Stadium, he praised Russian “unity” over the Kremlin’s military operation in Ukraine. Moments before Putin was about to conclude his speech, the broadcast on the public channel was interrupted by patriotic songs performed by Russian musician Oleg Gazmanov. The speech was then replayed from above until Putin left the stage.

In his address, Putin praised all pro-Russians who support what Moscow calls a “special military operation” in Ukraine. The rally was reportedly attended by 20,000 people, where Putin once again justified his invasion of Ukraine, saying it was in response to “neo-Nazis and extremist nationalists” in Ukraine who were committing “genocide” in the Donbass. Thousands of people, waving flags and singing praises for Russia, had gathered at the Russian national site to mark the 8th anniversary of Moscow’s annexation of Crimea.

“The country hasn’t seen such unity for a long time,” Russian President Vladimir Putin said as he walked the stage, calling the war on Ukraine a “testimony to Russia’s Christian values.”

“It was truly genocide. Stopping that was the purpose of the special operation,” he added.

The rally took place on the 23rd day of the brutal Russian-Ukrainian war, which killed thousands in Ukraine. As the invasion intensified, Moscow also faced sweeping sanctions from the West, including the European Union aimed at pressuring Putin to withdraw troops from its embattled neighbor.

The show faced an abrupt hiatus while Putin was on stage. However, Kremlin spokesman Dmitry Peskov called the temporary shutdown a “technical failure”. Verbatim to regional media participants also said that Putin finished his speech before leaving the stage. Meanwhile, jailed opposition leader Alexei Navalny’s Anti-Corruption Foundation in Exile in a tweet on Friday raised eyebrows at the alleged problem. “Well, or sabotage,” the body tweeted after state television replayed the 5-minute speech.

As thousands of Russians crowded the stadium, waving banners and posters promoting Russian propaganda, reports emerged that people were also forced to attend the pro-government rally. Several Telegram channels claimed that students and employees had been invited by their superiors to attend the rally. Meanwhile, Putin’s crackdown on independent media in Russia broadcasting anti-war rallies intensified following which the BBC was forced to close its doors in Moscow. Rights group OVD-Info, which monitors political arrests, also reported that several independent journalists were also arrested for covering anti-Russian propaganda protests in St. Petersburg.