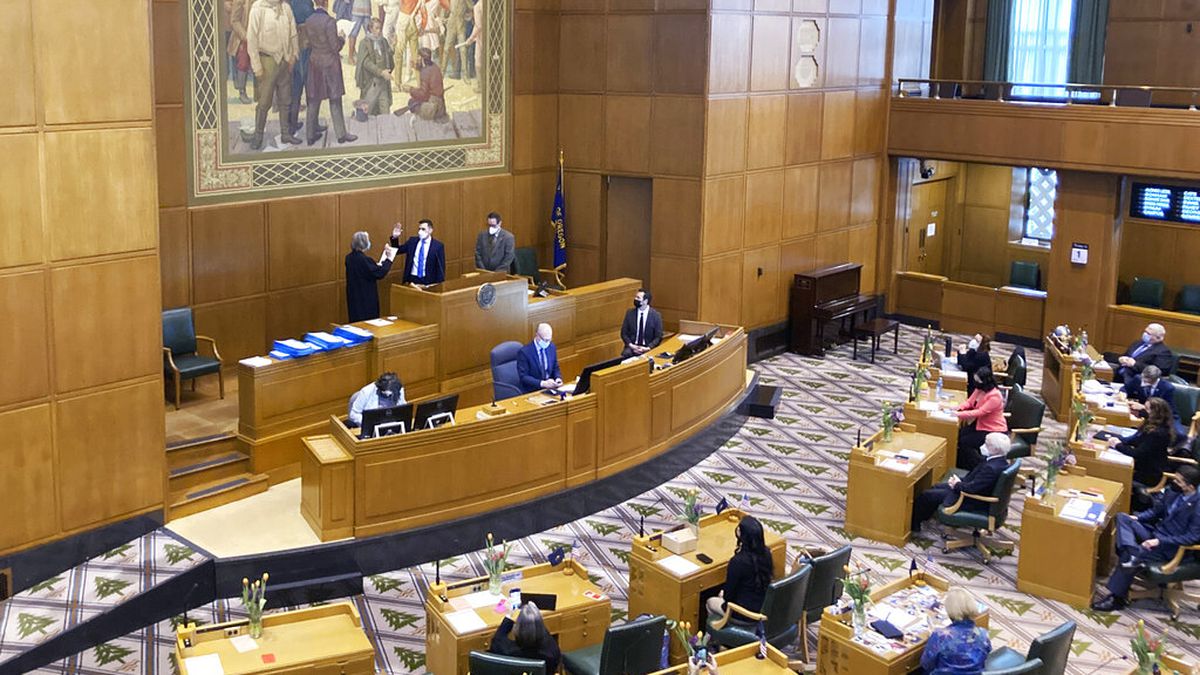 This is a biannual sprint, during which lawmakers hope to see their priority bills and budget requests cross the finish line in early March. And Tuesday morning — after the newly installed metal detectors and X-ray machines — all eyes were on the House as the chamber elected State Rep. Dan Rayfield, D-Corvallis, as the first new Speaker of the House in nine years.

With this move, the chamber set a somewhat optimistic tone for the session. Former President Tina Kotek, who resigned last month to focus on a gubernatorial bid, had seen once-professional relations with Republicans sour in recent years as the GOP repeatedly used walkouts and other tactics to delay Democratic priorities that they believe would hurt.

Rayfield pledged to use the relationships he had developed as the chamber’s top budget writer to try to ease that tension during what he called “the most important short session” that the state has ever had. Abbreviated even-year sessions began in 2012, and Rayfield suggested that COVID-19 left the state in a particularly tenuous place this time around.

“We’re all here because we want to do good for Oregon,” Rayfield said during a speech after his election. “It’s important to me that we give the measure of grace that comes from recognizing this in each of us.”

Rayfield was widely expected to win the presidency and had already started moving in the large office behind the chamber dais before the vote. But he faced opposition in the floor vote. As usual, Republicans nominated their caucus leader, Rep. Vikki Breese-Iverson of Prineville, for the job. Also to be considered was Rep. Janelle Bynum, the Happy Valley Democrat who opposed Rayfield for her party’s nomination last month. Although he lost that competition, Bynum was introduced as a potential speaker by Rep. Jack Zika, R-Redmond.

Bynum ended up getting four votes, including three from members of his own party. Breese-Iverson got 18 votes from Republican members. Rayfield won the contest with 32 votes, one more than needed to become a speaker.

While the outcome was expected, the details of Rayfield’s speech may not have been.

Rather than simply calling on his colleagues to come together in the face of common challenges, Rayfield looked back on a childhood split between Oregon and Southern California, during which he was physically abused by a step-parent. and watched his mother struggle with addiction.

“The chaos of my childhood followed me,” Rayfield said. “I struggled with ADD. I didn’t graduate high school on time because I failed an entire term for not showing up… I drank, I experimented with drugs while I should have focused on school.

Rayfield would be arrested four times, he said, and ended his first stint in college after two terms. He got a job at Disney World, as a skipper on the Jungle Cruise route, but said he was fired “because my jokes were so bad”.

“Everyone has their own background,” he said. “It was mine.”

Rayfield graduated from Western Oregon University and earned a law degree from Willamette University. Today he is General Counsel, one month shy of his 43rd birthday. But he said on Tuesday that his background has helped him better understand the challenges that people in the state face.

“There are so many Oregonians ending up where I was 20 years ago,” he said. “I stand before you as someone who’s been in that dark place…I also stand before you as living proof that the worst time in our lives doesn’t have to be our destiny.” He also acknowledged that his experience in the criminal justice system would have been different had he been a person of color.

Rayfield was first elected to the House in 2014, after running unsuccessfully for a Senate seat in 2010.

He rose through the ranks of the Democratic leadership with uncommon speed. After his first session in 2015, he was appointed House Majority Whip. Three years later, then-Speaker Tina Kotek placed him at the top of the Legislature’s budget-drafting committee, making him one of the most powerful legislators on Capitol Hill.

Rayfield spent all of his time in the Legislature working on budget issues and said he had worked hard over the years to develop a mastery that few other legislators possessed.

He also built a reputation for introducing good governance bills that sometimes came to nothing. In 2017, he attempted to create transparency rules on lobbying on Capitol Hill, but was unsuccessful. Two years later, Rayfield proposed a new system of campaign contribution limits that passed the House, but died in the Senate. Oregon remains one of the few states without such limits. It is not clear that several proposals that have been presented this session will have a better chance with Rayfield in charge.

Politically, Rayfield holds broadly similar views to Kotek, his longtime progressive ally. But he said recently he would seek to avoid the toxic relationships that have festered in the House in recent years, with Republicans repeatedly engaging in delaying tactics or stepping down to thwart Democratic priorities they say will would be harmful.

Rayfield said his approach to politics was informed by his parents’ widely differing views during his youth. His father, an insurance manager and Air Force reserve colonel, was a conservative. His mother was liberal.

Rayfield’s bipartisan vision is set to be tested repeatedly over the next 35 days.

Already on Tuesday, signs of potential disagreement appeared in the House. Several Republicans have risen to denounce a Democratic bill, HB 4002, that would grant overtime pay to farmworkers, a step they say will put small farms out of business. A similar bill was introduced last year, but was shelved because lawmakers could not agree on a way forward.

“This is a short session, but an important and complicated conversation,” said Rep. Shelly Boshart Davis, R-Albany.

Lawmakers also showed signs of tension over a pervasive point of contention in the state house: masking requirements. Several Republicans have risen to complain about the state’s rules, among the strictest in the nation, requiring Oregonians to wear masks in public spaces. Rep. Duane Stark, R-Grants Pass and others in his party also chafed at chamber rules requiring them to wear masks while talking on the house floor.

“Wearing a mask indefinitely for fear of getting sick may have caused more harm,” said state Rep. Lily Morgan, R-Grants Pass. “It is time for us to move on. It’s time for us to stand up to the Oregon Health Authority by making these rules permanent.

The comments prompted a rejoinder from Rep. Lisa Reynolds, a Portland Democrat and pediatrician, who pointed out that the number of Oregon children hospitalized with COVID-19 recently hit an all-time high.

“I’m tired,” she said, “of minimizing this deadly disease.”