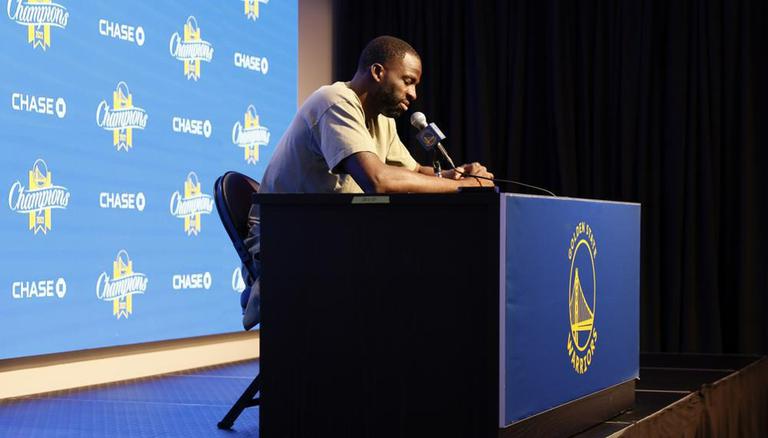 SAN FRANCISCO (AP) — Draymond Green has been fined but will not be suspended by the Golden State Warriors for a violent punch to the face of teammate Jordan Poole last week.

Coach Steve Kerr said after Tuesday’s preseason win over Portland that Green would return to practice on Thursday, then play for the defending NBA champions against Denver on Friday night and again in the opener. the season on Tuesday against the Lakers. Kerr, general manager Bob Myers and the players met to decide how best to proceed – including Green and Poole speaking to each other.

“We feel that we have a good feeling with our team. We have a lot of continuity on this team, so Bob and I know our players extremely well,” Kerr said. “We think that’s the best way after weighing everything for us to move forward. It’s never easy no matter what decision you make in a situation like this. It won’t be not perfect. It’s the biggest crisis we’ve ever had since I’ve been coaching here. It’s really serious.”

Green and Poole have met in recent days about the fight and everyone involved has been involved in extensive discussions since last Wednesday’s incident in practice, Kerr said. Two-time MVP Stephen Curry led some of those discussions.

“We’ve spent the last week having in-depth discussions with all of our key people in the organization, including Jordan and Draymond of course, Steph, all of our players, Bob, myself, and I can tell you there’s had a lot of conversations, 1-on-1, 1-on-1, player-only chats,” Kerr said. “Anything you can think of, all the different combinations you can have in a conversation, we had them deal with.”

Green has been away from the team since the altercation and trains alone every day.

Neither player was injured. The fiery Green has been a key veteran, defensive leader and part of Golden State’s four championships in eight seasons.

“Any criticism we face here is fair,” Kerr added of the team’s decisions, noting that “everything was on the table” regarding punishment.

Video of the punch leaked to TMZ was released on Friday. The footage shows Green approaching Poole near the baseline and coming at them chest to chest. Poole used both hands to push Green away, then Green punched Poole in the face and sent the fourth-year guard into the wall behind the baseline.

“He broke our trust with this incident but I’m giving him the benefit of the doubt because I think he deserved it, and I think our team feels the same way,” Kerr said.

Kerr said an investigation is ongoing into the leak.