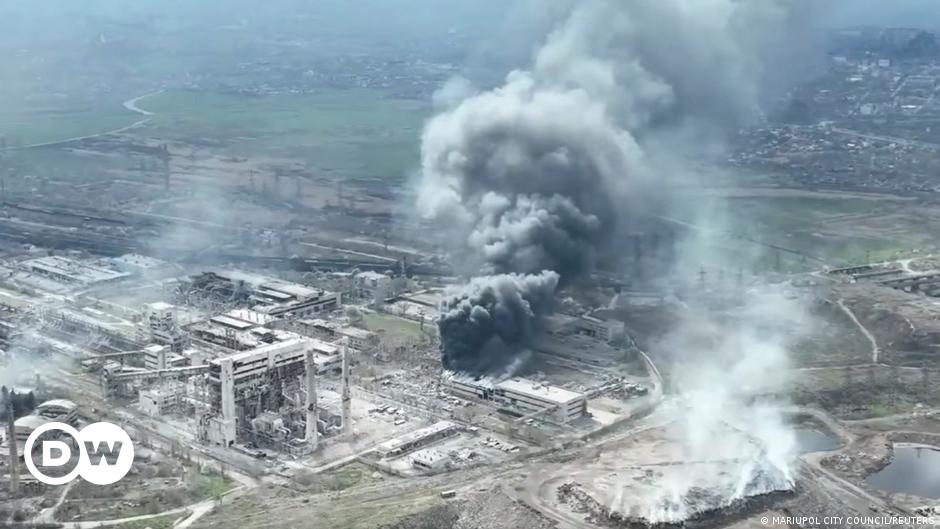 This article was last updated at 06:30 GMT/UTC.

Visit of the Spanish and Danish Prime Ministers to Kyiv

Sanchez had already indicated on Wednesday that he would travel to Zelenskyy, although further details were withheld for security reasons.

“In the next few days, I will meet President Zelenskyy and convey to him the unequivocal commitment of the European Union and, without a doubt, of the Spanish government and Spanish society to peace.”

Meanwhile, the Danish prime minister’s office said talks would focus on further support for Ukrainians and the prosecution of “war crimes and human rights abuses”.

According to Ukraine, four buses carrying evacuees from Mariupol left the besieged city.

She added that the evacuation of women, children and the elderly would continue on Thursday.

“The security situation is difficult. Things can change,” she added.

US President Joe Biden is expected to announce plans for additional military aid to Ukraine, a US official has told The Associated Press.

It is believed that Biden will deliver a speech at the White House Thursday morning on his plans for a new package on top of the roughly $2.6 billion already pledged to the country.

The latest package is expected to be similar in size to the $800 million announced by the US president last week.

The aid is expected to include heavy artillery and ammunition for Ukrainian forces in the battle for the Donbass region.

British military intelligence says Moscow could push its Donbass offensive harder in a bid to make gains ahead of Russia’s Victory Day, held annually on May 9.

He said the Russian military was advancing from staging areas elsewhere in Donbass towards the city of Kramatorsk, a major Ukrainian military center in the northern province of Donetsk. The town of 160,000 people is said to be under persistent rocket fire.

Britain’s Ministry of Defense said there was a high level of Russian air activity as Moscow sought to provide close air support for its offensive in the east. The goal, he said, was to destroy Ukrainian air defense capabilities.

The British intelligence report said Russia was seeking to demonstrate its successes ahead of VE Day, celebrating the defeat of Nazi Germany in World War II. The day is marked by military parades, during which Russia shows off its latest weapons.

“This could affect the speed and strength with which they attempt to conduct operations as this date approaches,” the report said.

Chinese President Xi Jinping on Thursday reiterated the country’s opposition to unilateral sanctions during a speech at the annual Boao Forum for Asia.

Xi criticized what he called “long-armed jurisdiction”, adding that “decoupling” and pressure by cutting supply chains would not work.

Beijing has accused the West of adopting a ‘cold war mentality’ towards Russia and abstained in a United Nations General Assembly vote on February 25 that condemned the invasion of Ukraine. .

In practice, imposing sanctions on Russia through the UN would likely prove impossible given that Moscow has veto power in the organization’s Security Council.

Red Cross denies kyiv’s accusations of collaborating with the Kremlin

The International Committee of the Red Cross (ICRC) has denied accusations made against it by Ukraine that the organization worked “in concert” with Russia.

Ukrainian mediator Lyudmyla Denisova denounced the ICRC’s announcement last month that it planned to open a branch in the Rostov region in southern Russia to help Ukrainian refugees. kyiv claims that Ukrainians in Rostov were forcibly expelled there by Russian forces.

Denisova said she had asked the ICRC, as well as her Russian counterpart Tatyana Moskalkova, for information about these refugees so that kyiv could help them return home. Denisova claims to have received no response from either Moskalkova or the ICRC.

Denisova said in a television interview that she “strongly [suspected]”that the Red Cross was “working together” with Russia.

Responding to these accusations, the ICRC told the AFP news agency that it “never helps to organize or carry out forced evacuations. We will not support any operation that goes against the will of the people and of international law”.

“Building and maintaining a dialogue with parties to a conflict is essential to gaining access to all those affected and obtaining the security guarantees necessary for our teams to provide lifesaving assistance.”

Chechen leader Ramzan Kadyrov said he believed Russian troops would have full control of the Azovstal steel plant in Mariupol on Thursday.

“Before lunchtime or after lunch, Azovstal will be completely under the control of Russian Federation forces,” Kadyrov said.

Kadyrov is the president of the Chechen Republic, an autonomous unit of the Russian Federation located in the northern Caucasus. Russia used Chechen fighters in its invasion of Ukraine.

Ukrainian troops have been entrenched in the steelworks of the beleaguered port city for weeks, but complain of running out of ammunition and essential supplies. A commander said Wednesday that his marines were “possibly facing [their] last days, if not hours.”

Russia had issued another appeal to the city’s defenders to surrender and on Wednesday offered a ceasefire to evacuate civilians, with Ukraine instead calling for a special round of talks without preconditions in the city.

Luhansk is, along with Donetsk, one of the two regions that make up the Donbass, disputed between Ukraine and pro-Russian separatists since 2014. Separatist forces have controlled the two regional capitals since the start of the conflict.

Before the Russian Federation launched its invasion of Ukraine, the Ukrainian government controlled 60% of the Luhansk region, while the rest was in the hands of separatist forces. Moscow recognized the independence of the two self-proclaimed Donbass “people’s republics” in late February, days before invading Ukraine.

Haidai said he seized the city of Kreminna and threatened Rubizhne and Popasna. He urged all residents to evacuate immediately.

The Donetsk region has also seen heavy fighting, especially around the port city of Mariupol, besieged since the start of the Russian invasion.

Ukrainian President Volodymyr Zelenskyy has denied receiving a written offer of a negotiated settlement to the war that the Kremlin claims it sent to Kyiv on Wednesday.

“I didn’t hear anything, I didn’t see anything. I’m convinced they didn’t hand over anything to us,” Zelensky told a news conference in Kyiv during a visit by the head of the European Council. Charles Michel.

Kremlin spokesman Dmitry Peskov previously claimed that a draft document containing “clear and elaborate formulations” had been handed over to Ukraine.

During a speech in Kyiv, Zelenskyy accused Peskov of “playing football with himself”.

Summary of Wednesday’s events in the Russian-Ukrainian crisis

Ukrainian presidential adviser and negotiator Mykhailo Podolyak said kyiv would accept Russia’s offer to hold a “special round” of talks in the besieged city of Mariupol.

US Treasury Secretary Janet Yellen led a multinational strike at a G20 finance meeting to protest Moscow’s invasion of Ukraine.

Russia said it had tested its new Sarmat intercontinental ballistic missile. US officials said they were aware of the Russian launch and considered it a routine launch.

The All England Club website has confirmed that tennis players from Russia and Belarus will be banned from the Wimbledon tournament in June.

Kremlin spokesman Dmitry Peskov told reporters that a draft peace proposals document had been handed over to Ukraine. Ukraine confirmed that it had received the proposals and said it was studying them.

You can rewatch our April 20 live updates here.