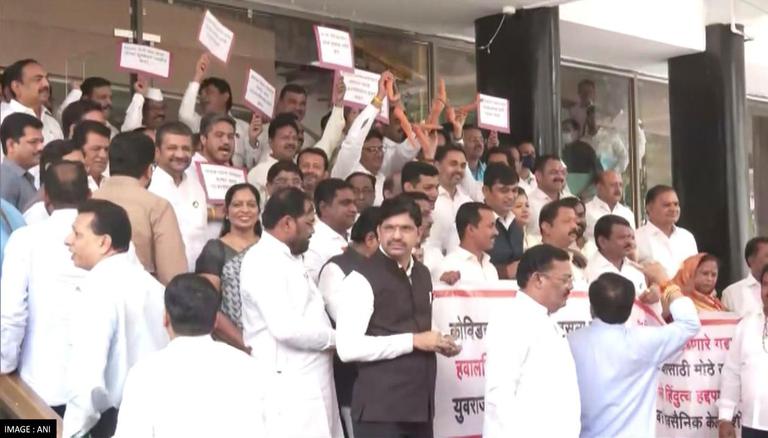 In a video posted by Press Agency ANI, members of the BJP and MVA were seen shouting slogans at each other and then entered the Chamber to watch the day’s proceedings. The monsoon session of the National Assembly will end on Thursday.

Earlier on Tuesday, MVA leaders led by Uddhav Thackeray including Shiv Sena’s Aaditya Thackeray protested against the Maharashtra government led by Eknath Shinde. Protesting MPs have demanded compensation for farmers whose crops have been damaged by this year’s heavy rains.

Days after Eknath Shinde was sworn in as Maharashtra’s chief cabinet minister, 18 ministers were sworn in by Maharashtra Governor Bhagat Singh Koshyari on August 9, which Shinde reiterated as the “first phase of the ‘firm expansion’. Notably, in a showcase of balance, nine BJP MPs and nine Shinde faction MPs secured places in the newly formed state government.

Shortly after the formation of the Cabinet, Chief Minister Shinde said that this was only the first phase of the Cabinet. “Other ministers still need to be added. This is a small cabinet,” he said.

Shinde and 39 other Shiv Sena lawmakers, in June this year, rioted against the party leadership, which led to the collapse of the Uddhav Thackeray-led government comprising the Sena, NCP and Congress. On June 30, Shinde was sworn in as chief minister with BJP’s Devendra Fadnavis as deputy.