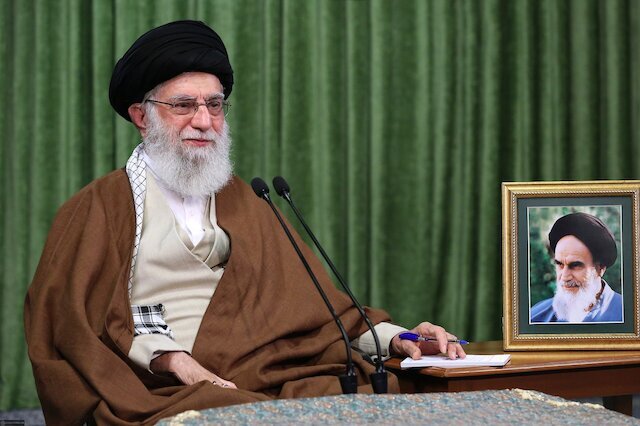 During his speech, in addition to talking in detail about Nowruz, the slogan of the year, and the importance of domestic production in solving the country’s economic problems, he described the contemporary period as “the one of the most openly shameful periods in current history in terms of oppression. »

Speaking about why he has chosen economic slogans over the past decade and also for this year, he said: “The reason why an economic title and slogan have been chosen for this year is the crucial importance of the question of the economy and also because of the economic crisis. challenges of the past ten years. Solving these problems requires planning, taking action and moving in the right direction. »

He pointed out that the main problem for executive officials and those involved in running the country is the economy. He added: “Of course, you can see new approaches used by people. If these approaches continue properly, it will be encouraging.

The leader also reiterated that the only way to achieve economic growth is to shift to a knowledge-based economy: “By knowledge-based economy, I mean taking a science and technology approach in all areas. This will result in reduced production costs, increased efficiency, improved product quality, goods and products becoming competitive in world markets and a reduction in the final price of products within the country. .

Elsewhere in his remarks, Ayatollah Khamenei said the choice of the Iranian nation was to confront arrogant powers, resistance, refusal to surrender and becoming dependent, preservation of independence and strengthening of Islamic Republic and the country internally.

He explained: “These decisions were made at the national level and are correct.”

He also referred to the current situation in the oppressed Muslim country of Afghanistan and how Americans left that country after 20 years, saying, “Developments in Ukraine are another example. The president of this country, who was installed by the West, uses a harsh tone when addressing the West.

Ayatollah Khamenei also spoke about the issue of Yemen and the daily bombardment of the resilient people of that country.

He also spoke about the beheading of 80 young men and teenagers in Saudi Arabia and said: “All these issues show the darkness that has engulfed the world and reveal the true colors of the bloodthirsty wolves who hold the world in their hands. “.

The leader also reiterated that the events in Ukraine show the existence of racism in the West.

He said: “Separating blacks from whites and getting them off (refugee) trains or expressing regret in their media that the war is taking place in Europe rather than the Middle East are examples of the racism evident in the West.

The leader of the Islamic Revolution also pointed out the double standards of the Western world when faced with oppression in different countries: “If oppression takes place in countries that obey them, they show no reaction at all. Despite all this cruelty and oppression, they claim to be the defenders of human rights. By using this false claim, they are intimidating independent countries. »