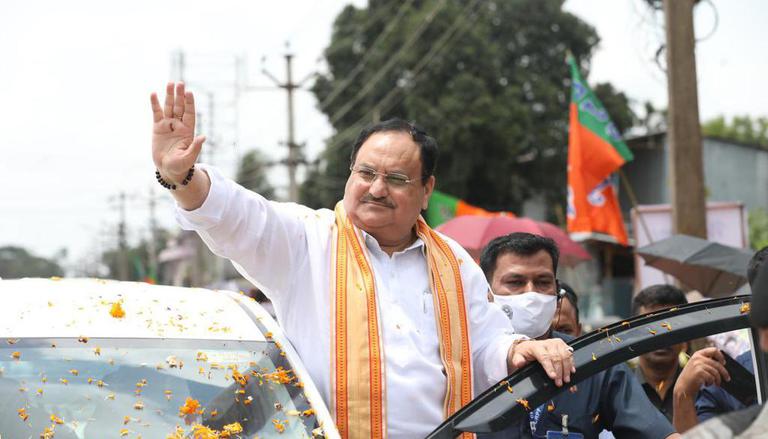 During his two-day visit to Tripura state, Bharatiya Janata Party (BJP) National Chairman JP Nadda chaired the meeting of state officials in Agartala on Sunday. Chief Minister Manik Saha was also present at the meeting which was held at the State Guest House in the city.

JP Nadda arrived in Agartala earlier in the day where he was received by Chief Minister Manik Saha and other BJP state leaders and party workers at Maharaja Bir Bikram Airport. At the airport itself, the saffron party chairman listened to Premier Narendra Modi’s “Mann ki Baat”, along with the CM and other BJP heads of state.

He is due to hold a series of crucial meetings in Agartala, where he is expected to deliberate on strategies for the upcoming Tripura assembly elections to be held next year. The BJP leader will also chair a meeting with BJP Janajati MPs and MDCs, as well as IPFT MPs. Later today, Nadda will also interact with the BJP Tripura Core Committee at the State Guest House.

On Monday, August 29, Nadda will depart for the city of Udaipur in Tripura, and in the midst of that, ‘Abhinandan Samaroh’ will be held at various locations. It is also expected to decorate the statues of Dr. Shyama Prasad Mukherjee and Pandit Deen Dayal Upadhyay near the University of Tripura. The BJP leader will also speak at a public meeting called ‘Janajati Janasabha’ in Khwumlung. The assembly election in Tripura is scheduled for early 2023.

Meanwhile, earlier today, Prime Minister Narendra Modi addressed the 92nd edition of his monthly radio show, Mann Ki Baat. Speaking on a host of topics, Prime Minister Modi urged citizens to participate in the annual “Poshan Maah” in the fight against malnutrition which is observed in September every year. Prime Minister Modi also recalled the “Har Ghar Tiranga” campaign and thanked the citizens for making it a huge success.

(With contributions from the agency)