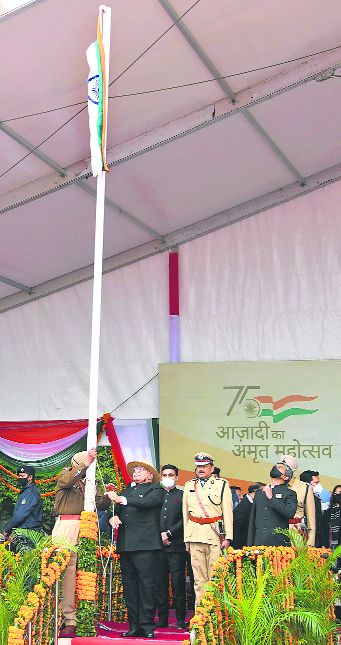 Chief Minister Manohar Lal Khattar on Wednesday greeted the people on the occasion of the 73rd Republic Day and resolved to make the state unemployment free by 2024.

The CM displayed the tricolor and received the parade salute on the ground from the police lines in Ambala City. He also paid homage to the martyrs at the city’s War Memorial.

Addressing the gathering, Khattar said, “Haryana is not only the land of the holy Gita, but it also has a special passion for patriotism and service to the country. The struggle for freedom started in Ambala in 1857 and now a Shaheed Smarak is being built to commemorate the sacrifices of the early heroes of the revolt.

Sharing the achievements, the CM said, “The development of every region and class is done in the spirit of ‘Haryana ek, Haryanvi ek’. No less than 17 new highways are being built to connect each district to national highways. Education and health institutions are strengthened. Clusters are set up at block level for MSMEs. “To make the young people of the State employable, the 75% quota policy has been implemented in the private sector. Under Haryana’s Enterprise and Employment Policy, the target is to create five million jobs, mobilize investments of over Rs 1 million and double exports. The Department of Foreign Cooperation was established to provide education and jobs to young people abroad and attract investment. We will make the state unemployment-free by the 75th Republic Day.

Karnal: Interior Minister Anil Vij unfurled the national flag in a district-level ceremony at the NDRI grounds. He took the parade salute and said, “Republic Day is associated with a long glorious saga of sacrifice by our patriots. Many freedom fighters fought a long battle and sacrificed their lives to achieve freedom for the country.

He said, “The sacrifice of the warriors will never be forgotten. To realize the dreams of the martyrs, we must contribute to the progress of the country.

Yamunanagar: At Jagadhri District, Assembly Speaker Gian Chand Gupta said that the country’s Constitution came into effect on this day in 1950, after which we all got justice, freedom and equality.

Kaithal: Minister of State for Labor and Employment, Anoop Dhanak, unfurled the tricolor during a reception here.