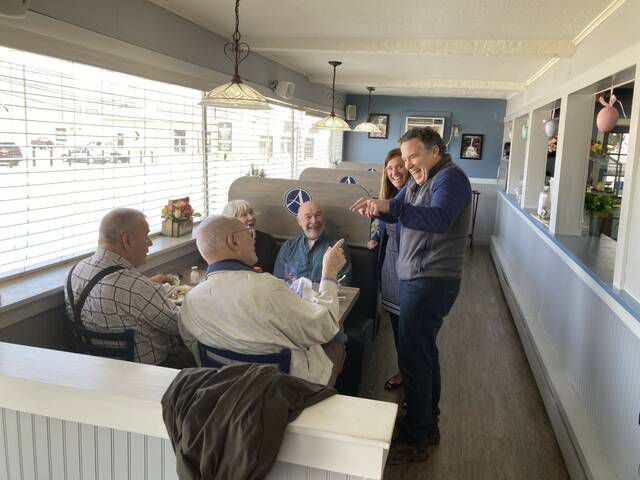 WYOMING — A stop at Diner Avenue on Saturday afternoon allowed U.S. Senate candidate Dave McCormick to communicate directly with voters as he pursues the Republican Party’s nomination in the upcoming primary election.

“We come to places like this, restaurants, VFWs, fire stations,” McCormick said in an interview held in one of the restaurant’s corner booths, with “McCormick for the Senate” signs. “hung in the window. “It’s the only way to really know what’s going on, it’s the only way to be really effective and it won’t stop if I’m elected.

“That’s what you have to do every day to be a senator.”

The stop in Wyoming was McCormick’s second of the day, following a fisherman’s breakfast in Clinton County earlier Saturday morning.

McCormick stopped at a number of booths and tables to greet and speak to customers, delivering his message and hearing directly from potential voters about the issues that matter most to them.

“Wherever I go, diners like this, I always ask people what their issues are,” McCormick said. “There are three things that come up a lot – inflation, freeing up our energy and securing our borders…those are the things I would focus on on day one.”

McCormick’s stoppage in Wyoming comes just over a month after the May 17 primary election. He is running to fill the seat vacated by US Senator Pat Toomey, who will not be seeking re-election.

Other notable candidates vying for the Republican nod include Dr. Mehmet Oz, businessman and former candidate for lieutenant governor Jeff Bartos and former US ambassador to Denmark Carla Sands.

While McCormick emphasized that he was running a campaign based on what he brought to the table, instead of focusing on other candidates, he singled out Oz as his main opponent, based on the polls.

“The difference between him [Oz] and me is that I’m genuinely Pennsylvanian,” said McCormick, who was born in the Pittsburgh area and raised in Bloomsburg.

McCormick also questioned Oz’s conservative credentials, pointing out many statements from Oz in the past that he felt didn’t align with the platform Oz currently runs on.

“He’s made a series of comments over the last 20 years about gun control, fracking…now he’s in an entirely different set of positions now that he’s running,” McCormick said of the post. ‘oz. “We are all held accountable for the lives we’ve lived and the positions we’ve held, and I think Pennsylvanians should demand that.”

A spirited rush Saturday at Avenue Diner provided McCormick with plenty of hands to shake and people to meet, many of whom came away impressed by their conversation with the Senate candidate.

“He seems genuine, he doesn’t feel like a politician,” said Exeter-born Tom Massara, eating at the counter as McCormick stopped to say hello. “I also like his commercials.”

Bruce and Bonnie Levy of Kingston had just been seated when McCormick stopped by their booth. Bruce made sure to point out the counter chair where, during a 2008 visit, Senator Barack Obama sat during his own visit to Diner Avenue.

“This place is a landmark,” Bruce said. “I think more candidates should consider coming here.”

McCormick was scheduled to make an appearance at Lackawanna Republican Party headquarters in Scranton on Saturday night, and he said he was working to make stops in the handful of Pennsylvania counties he has yet to visit during the campaign trail.

In his remarks to reporters, McCormick alluded to living the “American dream” growing up and said one of his reasons for entering the Senate race was also to help others achieve their dreams.

“When you’ve lived the American dream and benefited from it, when the country is in trouble, you feel compelled to do something,” McCormick said.

“This is my chance to try to do something, to go to Washington and fight for the people of Pennsylvania.”