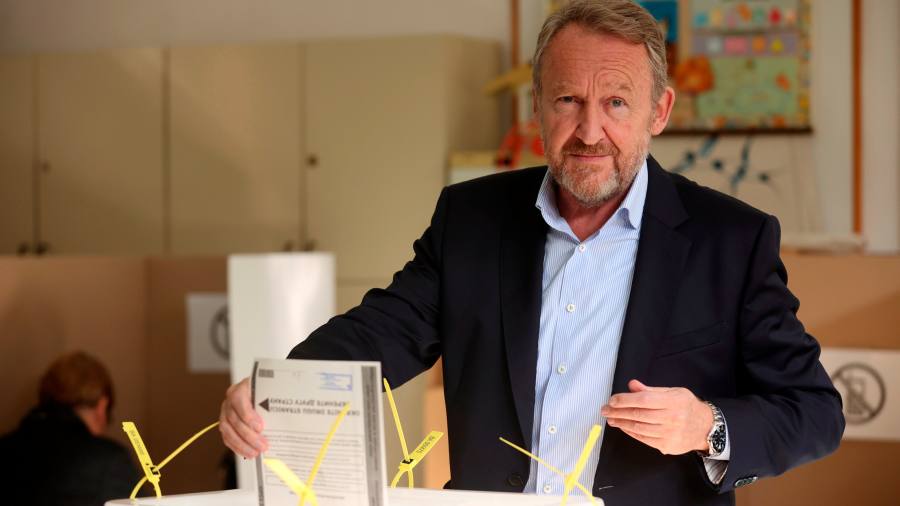 Bakir Izetbegović, one of Bosnia’s longtime leaders, lost his bid for the country’s three-party presidency to a moderate opponent, after a general election that otherwise maintained entrenched divisions between the top three Balkan state ethnic groups.

Izetbegović, a member of the presidency for two terms until 2018 and who leads the nationalist Party of Democratic Action, was soundly defeated in Sunday’s vote by Denis Bećirović, a joint candidate representing nearly a dozen majority parties. liberals and centrists.

“It’s time for a positive turnaround in Bosnia,” Bećirović told reporters as the margin of his victory became clear and Izetbegović conceded defeat. The results were provisional as not all votes had been counted on Tuesday.

The rejection of Izetbegović, whose father was Bosnia’s first president, as well as the electoral defeat of the candidate of another of Bosnia’s main parties, the Croatian conservative HDZ, signaled a shift away from nationalism, analysts said. The Croats will be represented by Željko Komšić, a veteran social democrat.

Still, although weakened, both Izetbegović’s PDA and the HDZ retained strong positions in the other governing bodies that were in contention, suggesting that any improvement would not come quickly, analysts said.

Srecko Latal, an analyst at the Balkan Investigative Reporting Network, said: “Expectations that Bosnia will one morning turn into Belgium are unrealistic. We have serious legal, technical, political and social problems. If change is to be real change, then it must be slow.

Bosnia’s constitution, which emerged from the breakup of the former Yugoslavia following the brutal war of the 1990s, was drafted in such a way as to maintain a fragile political balance. While these government structures have largely maintained peace, their complexities also make political progress difficult.

The country’s stability has been undermined in recent years by political disputes between Bosnians and Croats, just as Serbs have openly debated the idea of ​​secession.

Bosnian Serb leader Milorad Dodik, a key ally of Russia, was elected president of the Serbian Republic on Sunday, while the candidate of his SNSD party won the votes for the three-way presidency.

But the margin of victory has shrunk considerably, indicating Bosnians are growing weary of his rhetoric and closeness to Vladimir Putin, analysts said. Dodik, who has been blacklisted for corruption by the United States, has maintained a close relationship with the Russian president, visiting him twice in the past three months.

But Maxim Samorukov, of the Carnegie Endowment for International Peace, said Putin’s support was not the vote winner it once was, especially since the war in Ukraine.

“Trump cards like Putin’s endorsement didn’t mean much and didn’t guarantee a clear victory,” he said. “We are probably seeing the beginning of the very end of Dodik’s rule,” he said, as Bosnia’s economy and its voters aligned more with Western Europe.

Bosnia’s complex constitutional checks and balances have led to frequent gridlock and dysfunction in government as veto powers have been used and abused. One of its two main constituent parts, the Bosnian-Croat Federation, had been unable to form a government during the entire duration of the previous mandate.

Bosnia’s UN-appointed international monitor waited only minutes after polls closed on Sunday to impose rules he hoped would help streamline the political process.

Christian Schmidt, a German diplomat who took office last year, said he would not allow anyone to hold the political process hostage, as he introduced strict release mechanisms and deadlines to “safeguard the functioning of the Federation”.

“Many procedures are simplified. Deadlines are introduced. And so are the consequences of not meeting those deadlines,” he said. “It is necessary for Bosnia to progress towards EU candidate status.”

Election-related political tensions have overshadowed other priorities for Bosnia such as rampant emigration, especially among young people, tackling rampant corruption, ending the country’s deep economic dysfunction and putting it on a path to recovery. possible integration into the EU.

“The issues raised before the elections have nothing to do with plans of what they intend to do while they are in power, concrete issues and plans,” said Ivana Koraljic, director of Transparency International in Bosnia. “They only played the nationalist card.”