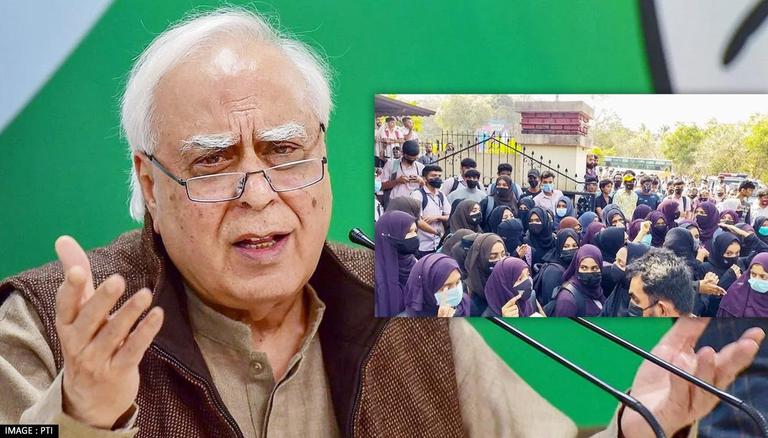 Sparking a row on Thursday, senior Congress official Kapil Sibal linked the Hijab controversy in Karnataka to assembly elections in Uttar Pradesh, Uttarakhand, Manipur, Goa and Punjab. Taking to Twitter, the Rajya Sabha MP launched a veiled attack on the BJP, saying it was trying to drive a wedge in society to rack up political gains in the polls. He opined: “Those who spread poison hiding their intentions, they are anti-nationals if you see their true face.”

A day earlier, Congress General Secretary Priyanka Gandhi Vadra also waded into that row. She argued, “Whether it is a bikini, a ghoonghat, a pair of jeans or a hijab, it is a woman’s right to decide what she wants to wear. This right is guaranteed by the Indian constitution.”

With elections in 5 states:

The Row of Hijab in Karnataka

The controversy erupted in December 2021 when the Government Pre-University College in Kundapura issued a circular banning the wearing of hijab in classrooms. As some students were not allowed into classrooms due to this rule, there was considerable outcry. Over the past few days, chaotic scenes have been seen with Hindu students seeking to attend university wearing saffron shawls protesting against hijab in various locations across Karnataka including Vijayapura, Mandya, Bagalkot, Hassan, Belagavi, Davangare , Kodagu, Chickaballapur, Haveri and Kalaburagi. .

On February 5, the government of Karnataka issued an order prohibiting clothing that disturbs equality, integrity and public order in colleges where uniform is not compulsory. Speaking to the media on Monday, Karnataka Home Minister Araga Jnanendra made it clear that anyone wearing a shawl or hijab would not be allowed to enter the college premises. Even as Karnataka HC hears the case, the CM on Tuesday urged students, teachers and management of schools and colleges as well as people to maintain peace and harmony besides ordering the closure of all high schools and colleges for the next 3 days.

In an affidavit, the government of Karnataka asserted, “The very purpose of the uniform and dress code is to maintain equality among students and to maintain dignity, decorum and discipline in the classroom. Feelings of unity, brotherhood and brotherhood should be promoted within an institution. . In educational institutions, students should not be allowed to wear identifiable religious symbols or a dress code consistent with their religious beliefs and faith. Allowing this practice would lead the student to acquire a distinctive and identifiable trait that is not conducive to child development and academia. »