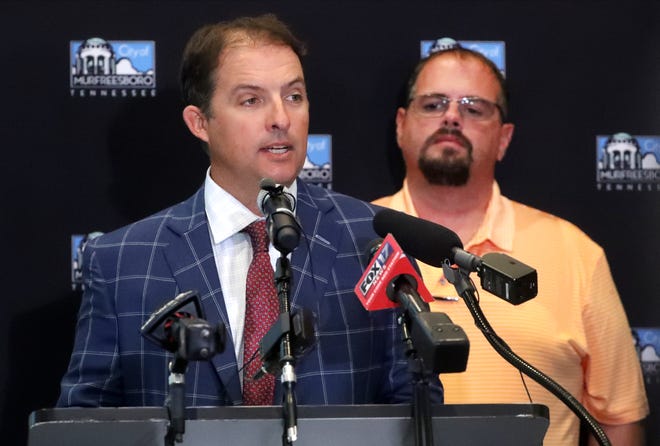 Middle Point Landfill is expected to face a federal lawsuit accusing the owners of causing odors and water pollutionMurfreesboro officials decided on Wednesday.

Middle Point is located near the northern edge of Murfreesboro near the East Fork Stones River, which is the source of drinking water for the city and much of Rutherford County.

Murfreesboro Mayor Shane McFarland spoke at a 1:15 p.m. news conference at the city’s airport to discuss landfill issues, following the council meeting. He mentioned that the city had received more than 2,000 online complaints from residents about landfill odors since September 2021.

“These complaints were received after several public assurances from the Republic a year ago that the odor issue would be resolved,” the mayor said. “Yet the problem persists.”

‘The times have changed’:How landfill decisions in 1987 and 1995 shaped Rutherford County today

Republic Services emailed the following statement to the Daily News Journal in response to the lawsuit:

“We are reviewing the complaint now. Over the past 18 months, Middle Point has invested more than $6 million in landfill infrastructure improvements, with additional investments planned or already underway. The community can be ensured that Middle Point remains committed to being a safe, responsible landfill operator and good neighbor.”

The city also opposed a 99 acre expansion project of Middle Point which is located on East Jefferson Pike (State Route 66) and adjacent to US Highway 231 North (Lebanon Pike) in the community of Walter Hill on the north side of Rutherford County.

Murfreesboro officials have estimated that the existing 207-acre landfill will be full by July 2026. City officials have considered alternative plans, including waste-to-energy operations and hauling garbage to another landfill outside of Rutherford County.

The source of Middle Point’s smell goes beyond waste dumped at the landfill, the mayor said.

“Landfill-related odors relate to how a site is operated, including how gases and the millions of gallons of leachate (liquid) produced by the landfill are collected and managed,” McFarland said.

“Landfill gas emissions and leachate outbreaks in any landfill are a source of unpleasant odors like those described in hundreds of citizen complaints received by the city.”

The mayor noted that there is documented evidence that Middle Point is failing to contain gas emissions and leachate outbreaks.

“These issues are in addition to the massive, uncovered waste piles at Middle Point that finally caught fire in (June),” McFarland said.

Others, including Rutherford County Mayor-elect Joe Carr, have raised concerns about the Middle Point operations. He shared on Facebook a video he recorded from landfill on fire in June.

“This is serious business,” said Carr, a Republican who will replace Mayor Bill Ketron. “You shouldn’t have a fire in a landfill. You don’t know what’s burning and you shouldn’t release toxins into the air.”

Carr argues that this fire should be considered more of a threat than a minor incident.

“If a landfill fire isn’t serious, then let’s set it all on fire,” Carr said. “Let’s burn all this fucking stuff.”

Mayor McFarland also mentioned that an outside consultant in February used an infrared camera to examine the Middle Point landfill and found plumes of noxious gas coming out of the landfill’s two closed gas flares.

“These plumes should and wouldn’t be there if the flare combustion system was working properly,” McFarland said.

The mayor also added that the US Environmental Protection Agency in August 2021 had the same conclusions in a report that the consultant had in February of this year.

“The EPA has noted that something is wrong with the flare system because these conditions have not been observed at other landfills,” McFarland said, adding that the gas plumes are a concern for the community. .

“Depending on wind direction and thermal layers, these gases move and can come into contact with the ground, in homes and businesses.”

In addition to the odor issues, the lawsuit will provide evidence of water samples from the discharge of leachate from the landfill contaminating the Stones River near the city’s Walter Hill recreation area.

The city also found similar evidence of landfill leachate south of the Matthew’s Lake area, where an underground water source flows to the East Fork Stones River, the mayor said.

Leachate evidence from the water sample, the mayor said, also reveals an elevated level of a chemical known as PFAS, which is polyfluoroalkyl substances, according to the EPA website.

“PFAS chemicals are toxic, but are not absorbed through the skin,” McFarland said. “The city will nonetheless post signs in the Walter Hill Recreation Area advising people boating or swimming in the Stones River not to ingest the river water.”

In addition to the lawsuits, the city will provide two written legal opinions on the issues to the Tennessee Department of Environment and Conservation and the national EPA, the mayor said.

A notice will notify regulators that landfill leachate discharges are in violation of federal clean water law, the mayor said.

The other notice will provide evidence that the landfill violates federal clean air law, McFarland added.

The notices are required by federal law in further legal action against Republic Services. The city will file additional lawsuits if Middle Point fails to resolve the issues within 60 days, the mayor said.

McFarland also noted that the city website will provide copies of the lawsuit and legal notices.

A lawyer seeks to reduce what is buried in the landfill

Matt Ferry, Democrat of Murfreesboro is a long-time supporter of reducing the solid waste landfilled at the Middle Point Landfill through recycling and composting. He organized a “Stop the Super Dump” Facebook group to advocate against the expansion of the landfill.

“We are for better practices, not for the complete closure of the landfill,” Ferry said. “We are aware that if this happened, the costs (for waste removal) would skyrocket and people would lose their minds. And honestly, there are a lot of people who don’t have the money for another public service.

Ferry is the Democratic candidate campaigning against State Rep. Bryan Terry, R-Murfreesboro, in the Nov. 8 election.

“We want a plan that reduces waste because that’s part of the problem,” said Ferry, who questions why Republic is allowing waste from 27 counties in Middle Tennessee from 2022 to be dumped at Middle Point. “It’s scandalous.”

“People in this area are at their wit’s end,” said Ferry, who praised the city’s efforts to oppose the dump.

“If we reduce waste, it will extend the life of the landfill,” Ferry said. “We definitely need more recycling and composting. We have to think about landfill as a last resort. They want to put everything in the landfill, but not everything belongs there.

Contact journalist Scott Broden with news tips or questions by emailing him at [email protected] Follow him on Twitter @ScottBroden. To support his work with The Daily News Journal, sign up for a digital subscription to all dnj.com stories.

By the Numbers: Middle Point Landfill