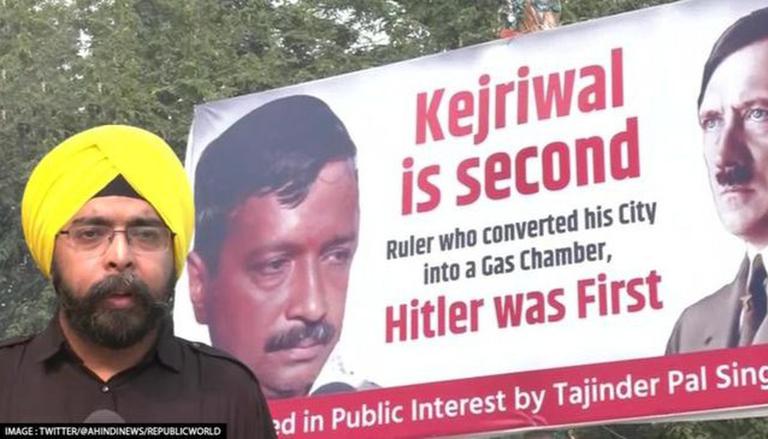 As Delhi’s Air Quality Index (AQI) remained in the “very severe” category at 431 on Saturday, a political war of words continued over Delhi’s pollution. As residents of Delhi and adjacent areas are condemned to breathe noxious air, a poster comparing Delhi Chief Minister Arvind Kejriwal to Adolf Hitler was displayed by BJP leader Tajinder Pal Singh Bagga at the exterior of the BJP headquarters in Delhi.

The poster with the caption, “Kejriwal is the second ruler who converted his city into a gas chamber, Hitler was the first”, was displayed in the Pandit Pant Marg area of ​​Delhi.

In an exclusive conversation with Republic, BJP leader Tajinder Pal Singh Bagga said: “Arvind Kejriwal has turned Delhi into a gas chamber. People are dying from pollution but he is doing political tourism. Hitler was the one who turned his city into a gas chamber, now Arvind Kejriwal would be known for it. It has not provided decomposers to farmers in Punjab. Incidents of stubble burning are highest in Punjab. Residents of Delhi and adjacent areas are suffering from its failure to address the causes of pollution.”

“Government of Haryana has tackled the stubble burning issues. Now very less incidents are reported regarding Haryana stubble burning. Punjab and Haryana are neighboring states but the Punjab government has failed to address pollution issues. Chief Ministers of Delhi and Punjab are visiting Gujarat and Himachal these days,” Tajinder Pal Singh Bagga added.

Air quality continued to decline in Delhi and the NCR region, with the AQI reaching over 500 in several areas. Delhi as an overall AQI is currently in the “severe” category at 431.